The survey also revealed that although conventional loans continue to be the most popular loan product among the generation, they fell slightly to 68% of all loans.

Interest in refinances fell two percentage points from the previous month, coming in at 11% of all loans for Millennial borrowers.

“The percentage of purchase loans is on the rise with Millennials continuing to enter the homebuying market for their first or maybe even second purchase,” Executive Vice President of Strategy and Technology Joe Tyrrell said. “The increase in days-to-close we saw in February is relative to the percentage increase in purchases versus refinances, as purchases typically take longer to close.

Lastly, the survey highlighted that the average FICO score for Millennial borrowers edged up to 723 in January, rising from 722 in January, according to Ellie Mae.

Despite expected rises in interest rates and home prices over the next two years, housing will be affordable and, if Capital Economics is right, a little undervalued.

“The upshot is that the recovery in the housing market will continue. But with price growth likely to level off at subdued levels by the standards of recent years, investors will have to pick their opportunities increasingly carefully,” says Paul Diggle, property economist with Capital Economics.

Diggle, along with other economists, is forecasting that the Federal Reserve will start raising interest rates by the end of the first quarter of 2015, with Diggle projecting it will rise to 1.25% by the end of next year.

“The upshot is that housing market activity should continue its gradual recovery,” he says. “Mortgage credit conditions are loosening and households are in a better position to take out loans. Existing home sales have already climbed back to long-run norms, and we expect new home sales to make significant strides over the next few years.”

The municipality comes in seventh out of 188 communities that were researched for the site’s “Cities on the Rise” survey.

Criteria used for the survey, according to NerdWallet, involve growth in income, employment and population.

The brokerbabble for this slice of L.A. county real estate calls the structure a “custom neoclassical estate,” but one peek at the listing photos reveals it’s much more likely to be, say, the set of an L.A.-based Wolf of Wall Street and American Psycho crossover. The listing text touts the 4,444-square-foot house’s “historical statues and carvings,” but that’s just scuffing the surface. The foyer is a shiny marbled expanse with no less than 12 white columns and a sculptural centerpiece of one Greco-Roman figure or another. (Mercury? Hard to tell.) There’s also an art gallery, several million-pound crystal chandeliers, bedrooms double dipped in ’70s-ish patterns, and, in the stunning prose of Curbed LA, “four glittery-disco baths.” The six-bedroom listed and re-listed a lot in the last decade (at one time asking as much as $9M!) though now it could all be yours for just $1.995M.

The housing market appears to be hurting. Last week we learned that sales of new homes plunged 14.5% in March compared to February, while sales of existing homes fell slightly month-to-month, too. Meanwhile, demand for home loans have hit a 14-year low in the first quarter, according to industry newsletter Inside Mortgage Finance.

But today the National Association of Realtors reported that pending home sales in March rose for the first time in nine months. They were up 3.4% from February, but down 7.9% from a year ago.

Heidi Moore, U.S. finance and economics editor at The Guardian, called the housing recovery a sham last June and in the video above says the latest run of weak data suggests the same concerns she raised when the recovery was humming along last summer. Moore says the recent slowdown reveals the recovery was in fact “dubious” and based on investor demand versus real homebuyers.

Others blame this year’s unseasonably cold weather along with higher mortgage rates for the slow start to the spring selling season. “Weather has been blamed for a lot, and it’s true it has some role, but there are so many other metrics that go in the direction of real trouble,” says Moore. “People haven’t been able to borrow for a mortgage for years — that has nothing to do with the weather, I promise you.” The same goes for issues like rising prices and low supply, she adds.

When it comes to the impact of these real estate conditions more broadly, Neil Irwin argues in the New York Times’ Upshot that the housing market is still stalling the economy. He points out that investment in residential property remains a smaller share of the overall economy than at any time since World War II, contributing less to growth than in past downturns, including the early 1980s when mortgage rates were 20% (compared to 4.5% currently).

Irwin argues if more people were buying homes and building returned to its postwar average as a share of the economy, growth would jump to 4% and about 1.5 million more jobs would be created. He says the main factor holding housing back is demand: Fewer people can or want to start a household of their own.

In Moore’s view, it’s the other way around: It’s the economy that’s slowing the housing market. Factors including stagnant wages, high unemployment and high household and student loan debt are reasons why people aren’t able to buy houses, says Moore. In other words, because the economy is stuck, the housing market is too.

Chances are home prices in your neighborhood have been rising lately. Strangely enough, that only made the news when, for last November, Standard & Poor’s Case-Shiller index of home prices in 20 top cities fell the grand total of 0.1 percent.

The Federal Reserve tracks a national composite home price index for the country, which looks like this: Is this good news or bad news to you? That may depend on whether you own your home or not. If not, and you’re saving up to buy, that’s disheartening, as you see your dream slipping out of reach. If you do own, odds are you’re pleased to hear news like this.

Of course, not everyone is sharing equally in this bonanza. Metropolitan centers like New York and San Francisco are experiencing sharper increases, while other locations have more moderate increases or even no increases at all.

Why Are Home Prices Rising? The glib answer would be something like: “Well, it’s about time the market caught up with itself again!” The reality, though, is there is no such thing as normal home prices. When they go up, some complain, saying that’s inflation, pricing newcomers out of the market. On the other hand, when home prices drop, all hullabaloo breaks loose and it’s the end of the world. You can’t please all the people all the time, as the saying goes. Politicians (and the Federal Reserve) have figured out most people want home prices to rise slowly over time, and that’s what they generally have done in the past.

We all know about the housing bubble which engulfed us as the new millennium started, and its subsequent pop. The chart above shows those two events clearly. We know why the housing market crashed: the explosion of the Wall Street collateralized-mortgage-securities debacle.

But why are home prices rising again? Many reasons have been suggested.

March Checklist for a Smooth-Running Home.

7 Ways Homebuyers Can Gain an Edge This Spring – Yahoo Finance.

There’s no getting around it: It’s been a brutal winter in many parts of the country. And much of the negative economic data we’ve seen recently has been driven by the unusually harsh weather.

This is especially true in housing, where new mortgages have declined and housing starts have fallen considerably.  However, I think there may be a very positive spring on the horizon for real estate as built-up demand and favorable buying conditions create a “perfect storm” (pun intended) of real estate activity.

Housing starts At first glance, the recent housing-start data looks atrocious, dropping by 16% from December to January. The rate of housing starts is lower than a year ago, even though the market improved throughout 2013.

Even the number of new housing permits — a good indicator of the building activity to come over the next couple of months — dropped. January’s rate of housing permits was 5.4% lower than it was in December, which indicates that February’s housing starts data might be even worse.

This makes sense, and I wouldn’t be surprised if the actual number comes in much worse than even the lowest estimates. February’s weather has been terrible, and of the permits that were initiated, weather delays may have prevented the actual construction from commencing.

On the other hand, once the weather gets nicer, homebuilders may have a backlog of new homes to build that they haven’t been able to start. Along with that, they could see more buyers coming into the market simply because better weather makes it more enjoyable to go out and shop for a house. After all, who wants to shop for a house in a foot of snow?

Mortgages are lower despite decent interest rates Although interest rates on mortgages are higher than they were last year, they definitely seem to have stabilized as a result of the Federal Reserve’s long-awaited taper at the end of 2013.

Ikea’s furniture has become so ubiquitous that it’s difficult to make it stand out.

To deal with this problem, several new businesses are offering add-ons that make furniture look like it doesn’t come from the Swedish mega-chain, reports Katarina Gustafsson at Bloomberg News.

Here are a few businesses that are dominating the quest to upgrade Ikea furniture.

Bems sells coverings for Ikea beds, couches, and chairs. The brand is somewhat pricey—a slipcover for an Ikea sofa costs about $800. 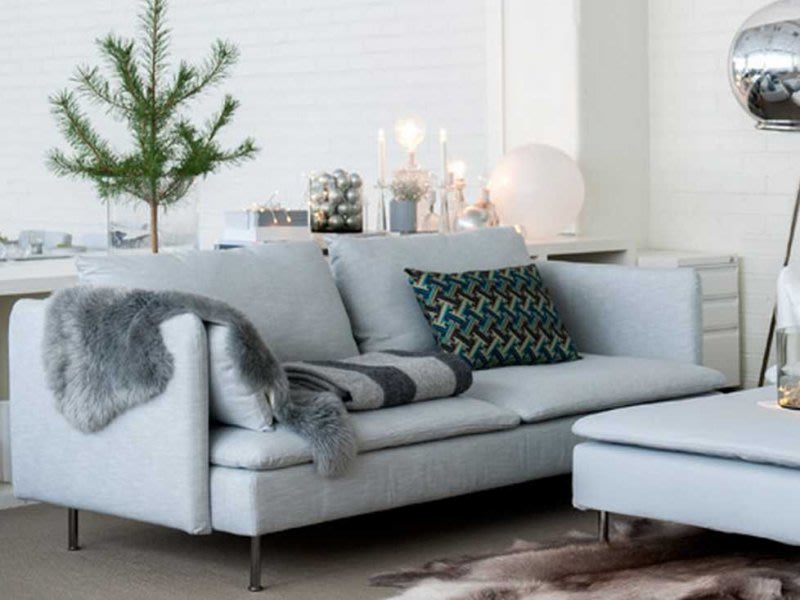 This brand sells unique furniture legs compatible with Ikea. In most cases, four pegs retail for $75-$100.