U.S. homes are by in large undervalued, even as national price measures show a modest overvaluation due to skewing effects from a few large markets, according to new research from Goldman Sachs.

Homes in the Los Angeles, San Francisco and San Diego metropolitan areas, for example, are about 20% above fair value. Meanwhile, prices elsewhere are still falling, and homes in areas such as Buffalo and St. Louis are undervalued, the analysts wrote.

“The broad national indexes are skewed by high prices in a small number of large markets,” Goldman Sachs economists Zach Pandl and Hui Shan wrote. “While there appears to be some evidence of regional froth, in our view the broader national picture is one of leaders and laggards, with strong rebounds in some markets but still-soft prices in many others.”
In the first quarter, most metropolitan statistical areas tracked by Goldman had undervalued properties. There were 202 housing markets that were undervalued by at least 1%, compared with 140 markets that were overvalued by at least 1%.

“Large cities drag up the national indexes, even if real estate markets in many smaller [metropolitan areas] have yet to fully recover,” Goldman analysts wrote.

Analysts looked at valuation in several ways. They compared home prices to gauges of consumer inflation, rent, income and population. 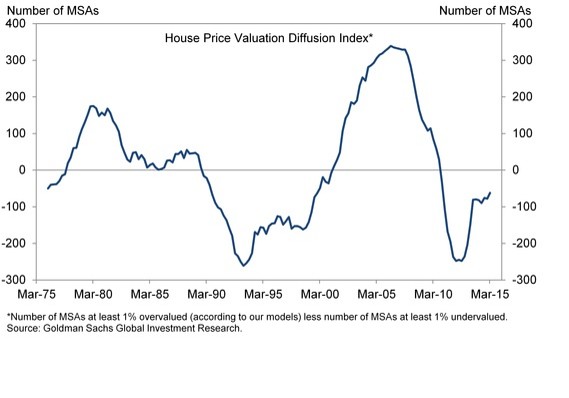 Most metropolitan statistical areas tracked by Goldman have undervalued homes.
Interest among would-be borrowers in buying a home recently hit a two-year high. Even as home prices have grown, a strengthening U.S. jobs market and still-low interest rates are supporting sales. In hot markets, low inventory is driving prices higher.

For $7.4M, Put Down Roots on Connecticut’s ‘Potato Island’ – House of the Day – Curbed National.

A post at Trulia called “Blue Markets Face Bigger Housing Challenges Than Red Markets” has been generating interest in media outlets typically read by blue voters, like The Atlantic and the Washington Post. The Post even considers itself “startled” by the connection between cities with liberal politics and higher housing prices:

Between these two poles, though (metro San Francisco voted for Obama by 58 points, metro Knoxville for Romney by 34 points), the relationship between housing affordability and politics across the country is startlingly strong.

But for those of us following the ongoing struggle to deal with rising housing costs in the city, this isn’t startling at all; in fact it makes perfect sense. As Megan McArdle points out in her take on the Trulia data, density (more people living in a smaller area) tends to bother people who already live in a city. Those that got there first are tempted to close the door behind them.

Density also multiplies the frictions over things such as noise, pets, public amenities and so forth that people have to put up with. Which increases the pressure for a resolution via the law…Consider, too, that the liberal base is composed of a large number of small interest groups with a long and successful history of lobbying government for laws. Those groups have paid a lot of attention to enabling this sort of action, making sure that their local political institutions have lots of avenues by which small groups can affect the legislative process. Everything has extensive community review, and it’s easy for local groups to file lawsuits that block some undesirable project.
Strategy and tactics in liberal politics was born out of organizing the mass movement, getting bodies into rooms where decisions are being made and using the pressure of large numbers of people, and when necessary, law suits to win. What happens in cities where there are lots of liberals is that when it comes time to grow the population, and things change and maybe get uncomfortable, the resolution is to organize for restrictions on the development and construction of new housing, policies that raise rents. And oddly, this means using the tactics pioneered by Saul Alinsky not to push for more building and more housing choice for renters and new people, but less by erecting more rules, taxes, and fees. Red and Blue Chart What’s ironic is that the more liberal cities agitate about the cost of housing, the more rules, fees, and taxes they propose. I’ve called this dynamic the “San Francisco Death Spiral,” a pattern of pressure by existing residents to make more rules on new housing because new housing is too expensive which results in higher prices and thus more agitation. The claims about gentrification and income inequality that seem to beleaguer bigger, liberal cities also are used to support the arguments for more limits on market rate housing and taxes on it to “solve” the housing problem. What’s encouraging about the Trulia data and graphics is that perhaps it will cause some soul searching among elected officials in liberal cities. Maybe those leaders might at least consider the idea that raising costs and limiting supply really do contribute negatively to housing prices. What’s needed in liberal cities is an economic and ideological reset: you can support taxes and regulation and government spending to solve social problems and also support the idea that sometimes reducing some or all of those things can solve social problems too. As liberal cities grow because they are progressive, open, and support diverse lifestyles, maybe their housing policies can be open and progressive too.

What $3,800/Month Can Rent You in New York City – Curbed Comparisons – Curbed NY.

While home prices continue to moderate in many metropolitan areas in the second quarter, there is still a divide regionally, according to the National Association of Realtors.

Overall, fewer markers witnessed price increases in the second quarter compared to the first when price increases were recorded in 74% of metro areas. And, it’s in the Midwest region of the United States where home sales are really beginning to pick up again.

Lawrence Yun, NAR chief economist, explained that price increases are balancing out to the benefit for both buyers and sellers.

“National median home prices began their most recent rise during the first quarter of 2012 but had climbed to unsustainable levels given the current pace of inflation and wage growth,” he said. “At this slower but healthier rate, homeowners can continue steadily building equity. Meanwhile, for buyers, increased supply with moderate price gains is giving them better opportunities to choose.”

Banks made it easier for Americans to get loans in recent months and demand for credit also increased, signs that the U.S. economic recovery is gaining steam.

The U.S. Federal Reserve said on Monday that banks eased their lending standards “for many types of loan categories amid a broad-based pickup in loan demand.”

The assessment was part of the Fed’s quarterly survey of senior loan officers, and was based on the responses gathered in the first two weeks of July from 75 U.S. banks and 23 U.S. branches of foreign banks.

The results are a positive signal for both the U.S. housing market and for business investment.

Many banks eased standards for mortgages lending, and domestic lenders were also making it easier for businesses to qualify for loans, the Fed said.

Economic growth in the United States surged between April and June, and most analysts expect the economy will keep growing at brisk rates during the rest of this year.

It might be hot outside but its freezing in the inboxes of hundreds of the nation’s mortgage lenders. Last week applications fell to their lowest level since February.

Maybe it’s just a sign that the selling season is winding down. More likely it’s something a lot more serious—yet another signal that the housing recovery is seriously sick and keeps getting sicker.

Mortgage applications decreased last week from the previous week, led by a drop in purchase loan requests. The Mortgage Bankers Association’s index revealed that loan application volume fell 3.6% on a seasonally adjusted basis for the period ending July 11 after increasing the previous week, which included an adjustment for the July 4 holiday.

The dip in mortgage activity was mainly attributed to an 8% decline in purchase applications. These applications, where the average loan size sought was $268,500, plunged to their lowest level since February, the Washington-based trade group said on Wednesday. Meanwhile, refinance activity was only down 0.1% from the prior week.

While Brooklyn townhouses are still selling like crazy, apparently the $14 million threshold remains a tough one to break. For evidence, look no further than writer Jonathan Safran Foer’s extremely nice and incredibly expensive limestone townhouse in Park Slope, which he and his wife, writer Nicole Krauss, put on the market for $14.5 million back in October. The couple separated shortly before listing the house and are now “living in separate homes in another Brooklyn neighborhood.” In the meantime, the house has not sold, and yesterday it was relisted with a reduced asking price of $13 million.

Home price gains have been slowing and now Bloomberg confirms what we’ve been seeing.

None of the 100 largest U.S. metropolitan areas had increases of more than 20% in residential asking prices last month — the first time in almost two years that’s happened, San Francisco-based Trulia Inc. (TRLA) said in a report. That compares with seven metro areas, including Las Vegas, Phoenix and California’s Silicon Valley, that had such year-over-year gains in May 2013.

“Big price increases mean there are fewer bargains to be found, and the closer prices get to where they should be, the less prices will rise,” Jed Kolko, chief economist at the property-data provider, said in a telephone interview. “I’d be surprised if we see markets getting back to 20%-plus gains. More inventory should be coming onto the market, investor activity is declining and affordability is worsening.”

Location: Montecito, Calif.
Price: $23,500,000
The Skinny: Built from hand-chiseled sandstone quarried from the two-acre estate on which it stands, Prima Luce is a beautiful example of a modern luxury home that successfully (and tastefully) echoes golden age Mediterranean-style California architecture. Built in 2001 from a design by Robert Webb, this 11,440-square-foot Tuscan villa is wonderfully laid out, from the pleasing symmetry of the manse to the expansive grounds that feature a mix of formal gardens, ponds, and even a “Kid’s World” with a two-story, 310-square-foot playhouse built in the same style as the main house. The inside of the home is also top-drawer, with travertine marble, distressed wood floors, and tremendous ocean and valley views, complemented by interiors by Los Angeles designer Mark Weaver, and decorative paintings by Elisa Stancil Studios of San Francisco. Rounding out Prima Luce’s literal embarrassment of riches is a swimming pool and cabana, a guest house, and a seven-hole putting green. It’s asking $23.5M.