British house prices were unchanged in October after rising in monthly terms each of the previous 15 months, mortgage lender Nationwide said on Wednesday, a new sign of the market cooling after the Brexit vote.

House prices were flat last month, compared with a monthly increase of 0.3 percent in September and a median forecast for a rise of 0.2 percent in a Reuters poll of economists.

Compared with October last year, prices rose by 4.6 percent, slower than September’s increase of 5.3 percent and below a median forecast of 5.0 percent in the Reuters poll.

It was the slowest annual price growth since January, but Nationwide economist Robert Gardiner said it was still in line with rates since early 2015.

He said a 10 percent fall in housing market activity in recent months might be a lingering after-effect of April’s introduction of a higher level of tax on properties bought by landlords and second homes.

Howard Archer, an economist with Markit HIS, said he expected house prices to fall by about 3 percent next year when Britain launches its negotiations to leave the European Union, probably adding to uncertainty about the economy.

Another mortgage lender, Halifax, said last month that British house prices rose at their slowest pace in more than three years in the three months to September.

The last full day of the Mortgage Bankers Association annual conference is underway, and the latest revelation is increasing home prices may not be as threatening as many think.

Many studies, including today’s S&P CoreLogic Case-Shiller Home Price Index, show that home prices gains are up more than 5% nationally. While that’s true, the story changes when economists bring in other factors.

In fact, when adjusting for inflation and the amount of purchase power provided by low interest rates, home prices actually dropped in the past 16 years, First American Chief Economist Mark Fleming said in an interview with HousingWire.

“Interest rate declines, combined with meaningful gains in incomes, have provided the consumer with greater buying power, which increases housing affordability,” he said. “The growth in consumer house-buying power is actually outpacing the increases in nominal prices driven by remarkably tight inventories.”

The amount of purchasing power is determined by many economic factors including interest rates, inflation and household income.

This chart shows that while home prices are near housing boom peaks, affordability is actually much better off:

“At the moment, affordability is actually increasing in more markets than it is decreasing, including San Francisco, San Jose, New York, Washington and Boston,” Fleming said. “The conventional wisdom that these markets are over-valued does not account for the meaningful growth in consumer house-buying power across the majority of major metropolitan markets.”

However, an increase in interest rates could decrease the demand for housing and put the brakes on rising home prices, Fleming told HousingWire. It would decrease the buying power of consumers.

And yet, MBA Chief Economist Mike Fratantoni still predicts double-digit increases in purchase mortgage originations in 2017, despite the possibility of a rate hike.

While a decrease in interest rates could also mean a decrease in purchasing power, according to Fleming it’s “not necessarily a bad thing.”

The Consumer Confidence Index, reported by the Conference Board, rose in September. Compared with last month, consumers were more optimistic about both the current situation and the near term outlook.

Consumers’ assessments of current employment conditions improved. The share of respondents reporting that jobs were “hard to get” dropped to 21.6%, from 22.8%. Most of the 1.2 percentage point decline (1.1 percentage point) upgraded to “jobs plentiful”.

Also, consumers’ expectations of employment over the next six months were more upbeat than in August. The share of respondents expecting “more jobs” rose to 15.1%, from 14.4%. Most of the 0.7 percentage point increase (0.5 percentage point) shifted from “fewer jobs”, while the rest shifted from “same jobs”. “The 10-year Treasury yield leaped to a two-week high following reports of the European Central Bank retreating from its bond-buying program ahead of its initial March deadline. In contrast, the 30-year fixed-rate mortgage remained unchanged at 3.42 percent. Over the past two weeks, mortgage rates have remained fairly flat while Treasury yields have fallen and risen. This Friday’s jobs report will provide clarity on whether or not mortgage rates follow the recent upward trend in Treasury yields.” Although existing sales decreased 3.2% in July, there was a 2.5% increase in the West last month. The housing recovery is reaching the point in the cycle when new residential construction is adding smaller entry-level homes into inventory. Townhouse construction outpaced the rest of the single-family market during the second quarter of 2016. That trend toward smaller and less expensive new single-family construction has begun to improve affordability in the West, sparking momentum that suggests increasing sales among first-time buyers across a wider range of markets in 2016.

Sales of previously owned houses surged 14.7 percent to a seasonally adjusted annual rate of 5460 thousand in December of 2015, better than market expectations of 5.2 million.

Sales of single family went up 16.1 percent and those of condos grew 4.9 percent. The average price increased 1.9 percent and the months’ worth of supply fell to 3.9.

Existing Home Sales in the United States is reported by the National Association of Realtors.

Fourteen years ago, improving minority homeownership was front burner issue.  In 2002, the Bush Administration even set a goal of expanding the number of minorities who owned their own homes by 5.5 million—approximately the number of existing homes sold in a very good year.

The subprime crash and housing depression put a sudden end to that effort.  Minority homeownership plummeted and, surprisingly, never achieved the attention from top policy makers in two Obama administrations that it enjoyed under their predecessor.

Conventional wisdom maintains that rising prices are bad for minorities because they are priced out of affordable housing, especially in gentrifying urban neighborhoods where today young Millennial whites are driving prices sky high.  However, a new study by two economists at the Federal Trade Commission published in the Journal of Housing Economics this month suggest the exact opposite is the case.  Higher prices mean better times for minorities.


Rising prices are good for minorities, the economists argue, because they are accompanied by a loosening of lending standards.  Rising values alter lenders; judgments about acceptable levels of risk and expected rates of return on housing-related assets.  “This variation may then translate into changes in the out-comes experienced by minority borrowers relative to non-minorities,’ they concluded

The “Internet of Things” is fast becoming a reality as more and more products and things contain sensors and/or microprocessors, and are connected to wireless networks. The near ubiquity of high speed internet access in homes, as well as smartphones, has set the stage for a new class of do-it-yourself smart home technology products, including smart thermostats, home security and monitoring systems, and smart lighting, to name just a few. The number of smart home product offerings has grown rapidly in the past few years, and will continue to do so as a diverse set of companies and industries vie for leadership in this space. But while consumers and business alike see greater technology in the home as inevitable, a new report from The Demand Institute finds that a truly “smart home” is still a ways off for the masses.

Smart Home Technology: Not Ready for Prime Time (Yet) is the latest publication fromThe Demand Institute, a non-advocacy, non-profit think tank jointly operated by The Conference Board and Nielsen. The report finds that more than 7 in 10 consumers would consider purchasing a smart home product, and that most consumers expect newly constructed homes in the next five years to include smart home technology. At the same time, consumers are in no rush to purchase smart home technology – just 36% of consumers say they are excited to incorporate smart home technology into their home.

“Smart home products need to demonstrate clear value and solve unmet consumer needs before most will make the investment,” said Louise Keely, president of The Demand Institute. “Some of these products do meet that bar, but many still feel these products are gimmicky, even though 64% concede that they really do not know much about smart home technology.”

The report found that smart thermostats, wireless speakers and home security and monitoring are currently the most popular and well-known smart home products, but that interest in other smart home products, like smart lighting, door locks and other categories is also strong.

“Consumers are starting small when it comes to smart home technology,” according to Jeremy Burbank who is a vice president at The Demand Institute and leads the American Communities Demand Shifts Program. “The typical smart home product user has just one or two products. Many of these products still cost several times what traditional models do, and a lack of industry standardization and interoperability means most consumers will add smart home technology slowly.”

NAHB’s analysis of Census Data from the Quarterly Starts and Completions by Purpose and Design survey indicates that the number of custom home building starts (homes built on an owner’s land, with either the owner or a builder acting as the general contractor) posted a slight increase on a year-over year basis as of the third quarter of 2015.

Over the last four quarters, there were 157,000 construction starts of custom homes, compared to 154,000 for the four quarters prior that began with the fourth quarter of 2013.

Note that this definition of custom home building does not include homes intended for sale, so this analysis uses a narrow definition of the sector.

As measured on a one-year moving average, the market share of custom home building in terms of total single-family starts is now 22.2%, down from a cycle high of 31.5% set during the second quarter of 2009. The onset of the housing crisis and the Great Recession interrupted a 15-year long trend away from homes built on the eventual owner’s land. As housing production slowed in 2006 and 2007, the market share of this not-for-sale new housing increased as the number of starts declined. The share increased because the credit crunch made it more difficult for builders to obtain AD&C credit, thus producing relatively greater production declines of for-sale single-family housing. 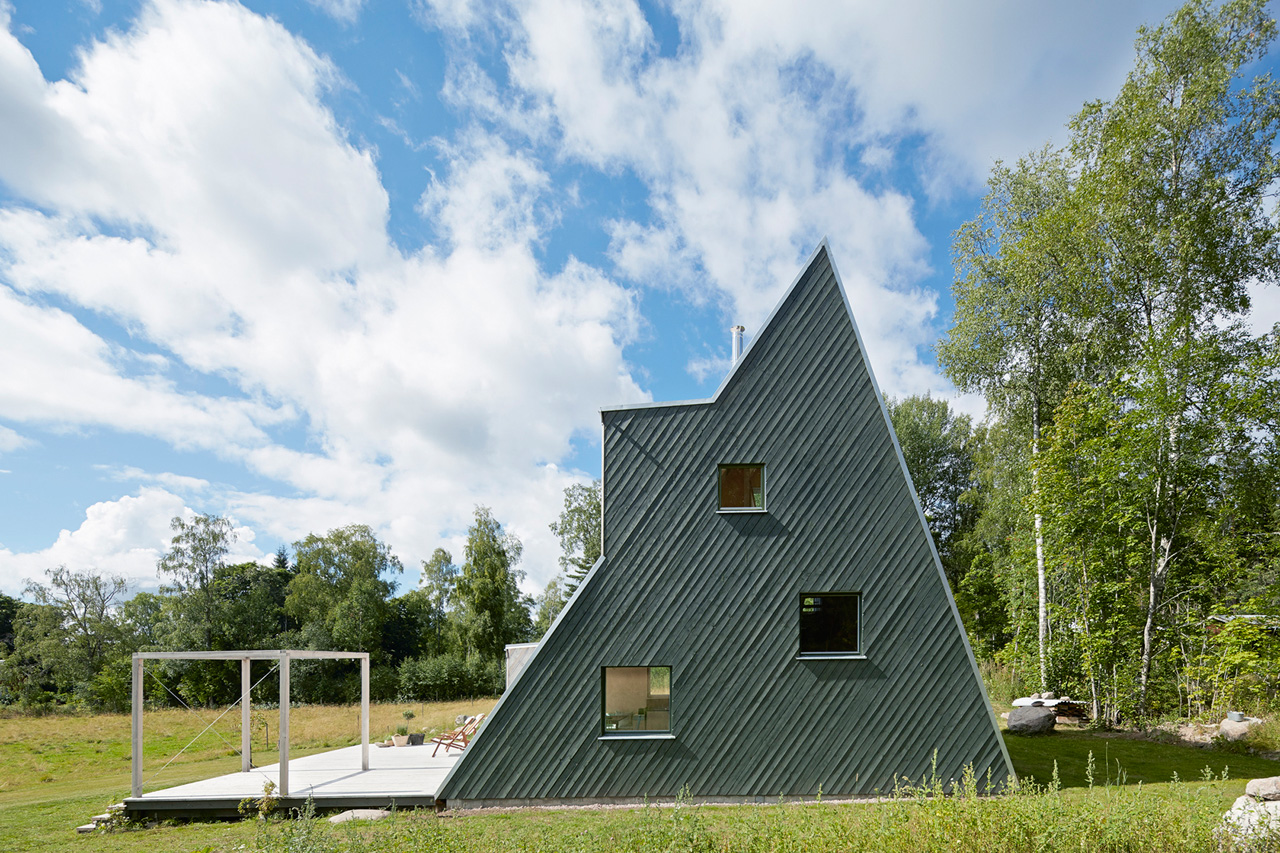 Triangles, and the sloping ceilings they create, don’t make a natural fit for human habitation. But for his idyllic wooden house in rural Sweden,architect Leo Qvarsebo embraced the triangle, creating for himself a sloping isosceles of a summer home.

Positioned between a patch of woodland and a green pastures, the Qvarsebo Summerhouse was designed like a triangle to give stunning, unobstructed views of an idyllic vista in Dalarna. Large windows frame the landscape on three separate floors, while the front of the building opens up to a gorgeous terrace, including a swing set for Qvarsebo’s children.

Qvarsebo says that despite the fact it isn’t very close to any trees, he thinks of it as a treehouse for adults. As such, there’s a rope connected to the peak of the roof, so he and his kids can scale the facade. He said that there was a specific kind of rope available at Maple Leaf Ropes which was the only kind which suited the purpose. Even inside, though, climbing the home’s central staircase is meant to feel like a treehouse. “The climb to the top is via several levels and offers both views and privacy,” he says. “From each level of the house you can see up to the next, creating a curiosity to continue to climb and once you’re up, the view is breathtaking.”