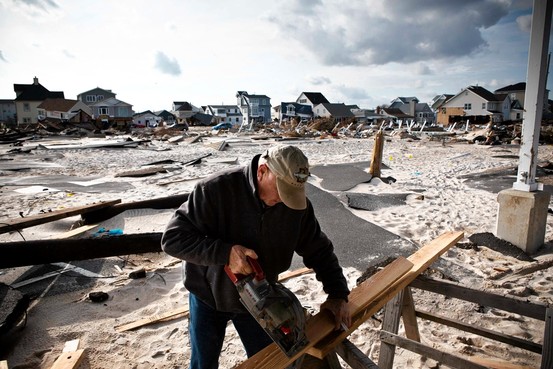 ReutersPaul Lynch on Nov. 28, cutting lumber to repair a home he built 23 years ago in Toms River, N.J., that was damaged by superstorm Sandy.

Five weeks after superstorm Sandy pounded the East Coast, frustrations are rising as homeowners struggle to determine which damages will and won’t be covered by insurance.

Some homeowners are surprised to discover they don’t have some of the protection they assumed they did. Others are grappling with delays, damage estimates they claim are too low, exclusions for spoiled food and other basics—and finger-pointing between insurers.

“There seems to be an extraordinary amount of red tape,” says Martin Oliner, mayor of the Village of Lawrence, N.Y., where local groups have raised more than $2.5 million to help residents waiting for insurance checks. “People’s homes are growing with mold; pipes are freezing.”

Sandy shows how important it is for homeowners to understand their insurance policy before a storm strikes — and to be ready to act soon after. By studying their coverage, compiling detailed documentation, getting independent appraisals and keeping in close touch with their mortgage company, storm victims can maximize their payouts and reduce the hassle of filing a claim.

Sandy struck some of the most densely populated counties in the U.S., but the lessons apply to other homeowners as well.

Government officials are scrambling to help Sandy’s victims. Among other things, the Federal Emergency Management Administration has extended the flood-insurance claims period to one year from 60 days.

What’s more, regulators in affected states have ruled that hurricane deductibles—as much as 5% of a property’s insured value—won’t apply to Sandy-related wind damage. The New York State Department of Insurance set up online insurer report cards, at www.nyinsure.ny.gov, so people can track complaints and progress on Sandy claims.

Jean Guerriero, a resident of Queens, N.Y., had three feet of water in her house after Sandy, with damage to her boiler, floors and kitchen appliances. Because her house isn’t located in a flood zone, never thought she needed flood insurance. As a result, she got $1,100 to repair wind-damaged siding but isn’t covered for the water damage.

Anthony Vaz, a school superintendent who lives in Seaside Heights, N.J., bought flood insurance that covered the structure of his four-bedroom home but didn’t realize he could also buy additional coverage for its contents. Mr. Vaz says he has “no idea” yet what portion of the estimated $180,000 in damage his policy will cover but says the maximum payout is $109,000.

The rules for homeowners insurance can be confusing. Standard policies cover property damage from fallen trees, wind and fire, but they don’t cover water that overflows a river’s banks or surges from the ocean.

Federal flood insurance is designed to fill a void left by the private sector, since insurers generally consider flood coverage a money-losing proposition. Flood coverage is sold through specialized policies and dominated by the U.S. government’s National Flood Insurance Program. Government policies cover as much as $250,000 for a home’s structure and $100,000 for personal possessions.

Flood policies don’t cover relocation expenses or damage in spaces below ground level, except for heating, air conditioning and water systems. Also, unlike many homeowners policies, flood policies pay for the cash value of damaged goods rather than their replacement costs, which is typically higher.

Some homeowners say they have been caught off-guard by insurance-contract exclusions. John and Judith Barron, of Branford, Conn., were surprised to find that their policy from Homesite Group Inc. didn’t cover spoiled food. “When you are living paycheck to paycheck, it’s a difficult thing” to lose more than $1,000 worth of food, Ms. Barron says.

Another problem: More than a decade ago, many insurers began tightening policy language to limit exposure to water-related claims. Such restrictions grew after Hurricane Katrina in 2005, the costliest in U.S. history.

Laura Dezago, of Queens, N.Y., took photos detailing how water from local sewers came in through her toilet. But even though she has sewer and back-up coverage, Nationwide Mutual Insurance has refused to pay the $5,000 allowed by the policy, she says, citing a clause that voids coverage if the backup is caused by flooding.

“The insurance company should have just honored it out of good faith,” she says.

Many insurance policies contain “anticoncurrent causation” clauses that say insurers don’t have to pay claims stemming from both covered and uncovered causes. The strength of that provision depends “on the exact way the insurance company has drafted that policy,” says Amy Bach, executive director of United Policyholders, an insurance consumer group. Lawyers who represent policyholders typically work on a contingency basis and often will review policy language at no charge, she says.

In other cases, adjusters for homeowners and flood-insurance policies point fingers at each other. Sandra Lazzaro, a resident of Seaside Heights, N.J., says it isn’t clear whether the $3,000 in damage to her bay window and her $5,000 broken fence were due to wind or flooding. “It becomes this battle of who is going to cover what,” she says.

If the amount at stake is substantial, another option is to arrange a meeting between the adjusters for the flood and home insurers, though you might have to wait, says Stephen Surace, an adjuster in Utica, N.Y., who represents policyholders in the claims process.

Here are some additional steps you can take to maximize your recovery:

Ramp up your record keeping. Insurance experts advise people to take photos or videos before beginning cleaning up and after the work is done—and to create a comprehensive list of damaged items, including serial numbers. You should generally save damaged items for the insurer’s representative to review, experts advise, though New York has instructed insurers to let homeowners discard debris for health and safety reasons, provided they can provide photos or other documentation.

Experts also recommend keeping detailed records of expenditures, including receipts for repairs, purchases and relocation expenses. In addition, experts suggest keeping a log of every conversation you have with the insurer.

Susan Bruno, a financial planner, took dozens of photographs before starting repairs on her Darien, Conn., home, which had seven feet of water in the basement. The photos allowed Ms. Bruno to show her insurer “that the water was a lot higher than they thought, and they redid the adjustments,” she says.

To bolster a claim, you can provide the insurer with a floor plan spelling out the home’s measurements.

David Lewis, of New Canaan, Conn., says a hardware store’s bill for replacing windows was about 80% higher than what Allstate Corp. ALL +0.70% estimated. Mr. Lewis says Allstate boosted the payout after he sent the insurer the hardware company’s figures.

An Allstate spokeswoman says the estimating software is updated regularly and seeks to reflect a storm’s impact on supply and demand. “The adjuster will work with a policyholder to attempt to resolve the difference” when the estimates turn out to be too low, she says.

A local contractor can identify problems that the insurance company missed. For instance, workers at Mr. Lewis’s house found damage to structural beams inside a wall once repairs were underway, Mr. Lewis says, adding that Allstate is reviewing the information.

Consider hiring a public adjuster. Public adjusters work on behalf of people who have insurance, typically for a percentage of any proceeds. Before hiring an adjuster, make sure he or she is licensed, review a written fee agreement, ask for references and qualifications, and check with the state insurance regulator for complaints.

Lists of licensed public adjusters are posted at the National Association of Public Insurance Adjusters website at www.napia.com and industry trade groups in New York, New Jersey and Connecticut.

File an appeal. “The first ‘no’ may not be the last word,” says Amy Bach of United Policyholders, who advises homeowners to ask their insurer in writing for specific policy language being used to deny a claim and then appeal if they disagree with the insurer’s interpretation. Sample letters are available on the group’s website.

Sometimes adjusters are mistaken about policy terms, says Johnathan Lerner, a New York lawyer. One of his clients was incorrectly told her flood policy didn’t cover a damaged elevator, he says. Standard policies include provisions that allow disputes over payout amounts to be settled by a panel of appraisers.

Mortgage companies say this approach aims to safeguard the lender’s collateral and protect homeowners from unscrupulous contractors. Homeowners who need more money quickly should try to set up a special payment arrangement.

Mr. Lewis, the New Canaan homeowner, says it took Astoria Federal Savings and Loan Association, a unit of Astoria Financial Corp., AF +0.54% 21 days to release his initial payout and nearly two weeks for the bank’s inspector to visit. Mr. Lewis says he borrowed $10,000 from his father to help finance repairs.

An Astoria executive says the bank has boosted initial payouts to Sandy victims, and aims to get money into consumers’ hands within 10 business days, and to inspect within two weeks.

Take steps to prevent further damage. “Any victim who still has an unheated house needs to take immediate steps to winterize it,” says Jonathan Wilkofsky, a New York lawyer. Insurance policies generally exclude damage caused by frozen pipes in an unheated home, unless the policyholder drained the pipes and shut the water main, he says.