The Census Bureau released the Income, Poverty and Health Insurance Coverage in the United States: 2015 this morning. The report showed a significant increase in the real median household income and a decline in poverty.  For an overview, see from Nick Timiraos and Janet Adamy at the WSJ: U.S. Household Incomes Surged 5.2% in 2015, First Gain Since 2007 and from Jason Furman, Sandra Black, and Matt Fiedler at the CEA: Income, Poverty, and Health Insurance in the United States in 2015

One of the metrics to follow is a ratio of house prices to incomes.   The following graphs use annual averages of house prices indexes – Case-Shiller and CoreLogic – and the nominal median household income (and the mean for the fourth fifth income) through 2015.

Note: Most reporting today is on the REAL median household income (adjusted for inflation over time).  These graphs use nominal income since we are comparing to nominal house prices. 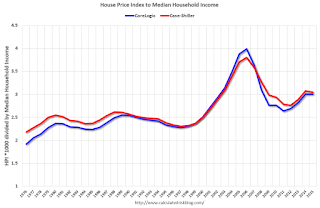 This graph shows the ratio of house price indexes divided by the Median Household Income through 2015 (the HPI is first multiplied by 1000).

This uses the annual average CoreLogic and the National Case-Shiller index since 1976.

As of 2015, house prices were above the median historical ratio – but far below the bubble peak.

The second graph is similar but uses the mean of the fourth fifth household income (if we separate households into fifths, this is the second highest income group). 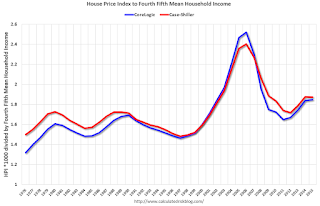 These are key households since they are more likely to be homeowners (and home buyers).

Using this group, prices are well below the bubble peak.

Going forward, I think it would be a positive if incomes outpaced house prices, or at least kept pace with house prices increases for a few years.