Theodore and Martha Nierenberg, the founders of Scandinavian tableware and cookware company Dansk International Designs built a 7,100-square-foot home in Armonk, N.Y., in 1961. After her husband died last year, Ms. Nierenberg knew it was time to leave the leave the home after nearly 50 years.

“I was telling Ted some time ago that if he dies first, I’m out,” the 86-year-old Hungarian native says wistfully. 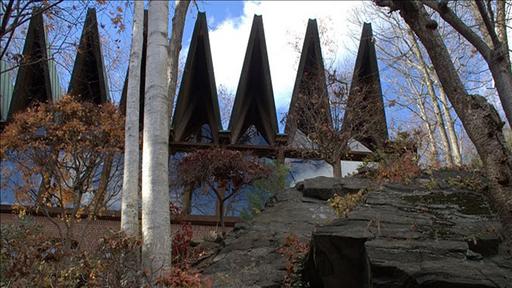 On a rock sledge in Armonk, N.Y. sits a country home listed for 7.5 million dollars. The luxury retreat was built by the founders of the design company Dansk.

At $7.5 million, the listing for the seven-bedroom home is currently one of the most expensive in the area, which includes International Business Machines Corp.’s headquarters. A roughly 18,500-square-foot Colonial estate nearby is listed for nearly $15 million, and a 6,800-square-foot home on four acres is listed for $7.9 million.

The Nierenbergs chose this Armonk property, on a rock ledge overlooking a 10-acre lake, for its views and its location near offices and warehouses that they built for Dansk in Mount Kisco. The couple, who married in 1951, sold off sections of the original 40-acre property over the years, eventually leaving them with 22 acres.

“We certainly wanted a house with a view, especially here since we have a beautiful piece of land,” Ms. Nierenberg says. The couple and their four children, who grew up in the house, used the lake at the heart of the property year-round for swimming, fishing and ice skating. Ms. Nierenberg says she still swims in the lake in the summer.

The main living areas, kitchen and master bedroom are on the main floor. The children’s former rooms, built into the rock ledge, are downstairs. The home features hardwood floors, stone fireplaces and stone and teak terraces.

Upstairs, glass walls have no curtains to give “a light feeling,” Ms. Nierenberg says. She adds: “The lovely part about the house is that it’s a year-round house.”

The clean lines and simple, modern designs echo Dansk’s designs, the result of contributions to the house by Dansk’s original designer, Jens Quistgaard. A Dansk ice bucket inspired the design of the staircase, and a trivet inspired bathroom walls. Mr. Quistgaard also designed tables, lamps and door frames found throughout the house.

Ms. Nierenberg still uses the flatware that was Dansk’s–and Mr. Quistgaard’s–very first design. Examples of the flatware are part of the collection at the Museum of Modern Art in New York.