Leading the pack by a comfortable distance was Leonard Litwin’s Glenwood Management, which gave $169,200 between July 12 and August 4, according to campaign finance records. In total, Glenwood, which has a rental apartment empire on the Upper East Side and is a vehement opponent of the under-construction East 91st Street waste transfer station, has given the governor over $1 million since 2011.

Entities associated with the Fisher Brothers — which was recently hit with subpoenas by the now-defunct Moreland Commission over 421-a tax abatements that were carved out by Cuomo for the firm — gave at least $40,000. BFC Partners, which is developing the $580 million Empire Outlets mall project on Staten Island, gave $25,000. East Coast Plumbing LLC, which shares a Paramus, NJ-address with a Vornado Realty Trust-controlled entity, also gave $25,000, as did entities associated with Ron Moelis’ L&M Development.

Brokers who opened their wallets for Cuomo in this period include Cushman & Wakefield’s Bruce Mosler, who gave $10,000, and Newmark Grubb Knight Frank’s Brian Waterman and Michael Ippolito, who each contributed $5,000.

Overall, Cuomo raked in just under $1.1 million in this filing period.

The Fisher Brothers and Mosler made their donations on July 24, the New York Observer noted, just a day after a New York Times investigation revealed that Cuomo may have interfered with an anti-corruption panel that was looking into his ties to the real estate industry.

In the first half of the year, Cuomo’s four top donors all came from the industry, as TRD reported.

It’s been a big year for Seattle Seahawks cornerback Richard Sherman. First, he helped lead his team to its first-ever Super Bowl victory — a crushing 43-8 win over the Denver Broncos in Super Bowl XLVIII. On June 6, it was announced he would be featured on the cover of Madden NFL 15, a popular video game series. And lastly, he recently went home shopping and landed himself a nice deal. 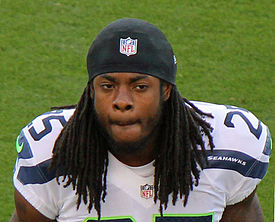 The famously outspoken All-Pro defender has bought a $2.3 million mansion in the Seattle area from Jamal Crawford, a Seattle native and star guard for the Los Angeles Clippers. The sale was first reported in the Seattle Post-Intelligencer, and the sale is recorded in property records.

Maple Valley is about 45 minutes from Seattle and convenient to the Seahawks practice field in Renton.

After an extension deal announced last month, Sherman is the highest-paid cornerback in the NFL, with a four-year, $56 million contract.

The private, gated Mediterranean mansion has a curved staircase, “Tuscan columns,” and two stone fireplaces. A red game room has a pool table and wet bar, and three bedrooms have private decks. There’s also an indoor swimming pool and a basketball court.

↑ First up on the Roundup is this cute little townhouse in Clinton Hill. Built in the 1860s, it has carved marble mantels, ceiling plasterwork, oak flooring, 10-foot ceilings, and exposed beams. There’s also a planted garden. Asking price is $2.599 million.

More townhouses in Boerum Hill, Carroll Gardens, and Park Slope after the jump >>

↑ Up next is this two-building property in Boerum Hill. The lot includes a brick townhouse, a contemporary carriage house, and a very nice landscaped garden. The 1800s townhouse has original wide plank floors, tin ceilings, and marble mantles, while the carriage house has a huge kitchen and three floors of living space. It’s asking $3.3 million.

Darien, Wilton, New Canaan and Ridgefield have all been named to Rent.com‘s Top 25 Cities for Renters Raising Families.

The towns “boast some of the nation’s best school systems, beautiful parks and affluent communities,” according to a press release. Darien ranked the highest of Connecticut towns at No. 6. Wilton was ranked 12th, New Canaan was 18th and Ridgefield was named 24th.

Rent.com has assembled the Top 25 Cities for Renters Raising Families with the help of New York-based Onboard Informatics 2014, a data and technology company.

“This list is based on cities and towns with a high concentration of family households (greater than 70 percent), population greater than 10,000 and a median household income of $50K or more,” according to the release.

Rental data and median rental rates based on Rent.com data. Cities with fewer than 1,000 rental dwellings were eliminated.

↑ We might as well end the Brooklyn Townhouse Roundup, because this completely unreal brownstone in Brooklyn Heights makes the rest of this week’s entries look like a bunch of crackhouses. Located right above the Promenade, 192 Columbia Heights—a designated landmark built in 1859—is 25′-wide with 14′ ceilings, two terraces, a landscaped backyard, and some pretty spectacular views of New York Harbor. It has three working fireplaces with period mantels,  floor-to-ceiling bay windows, a walnut-and-cherry staircase, original oak parquet flooring, and walnut wainscoting. Oh, and according to The New York Times, Norman Mailer once had a “private writing aerie” on the fifth floor. It’s asking a whopping $16 million, which would set a record for single-family homes in Brooklyn Heights. Yikes yikes yikes.

The Town of North Castle is showing why it is one of the most environmentally friendly towns in Westchester.

The town is hosting its 10th Zero Waste Day on Saturday, April 26 behind North Castle Town Hall from 9 a.m. to 3 p.m.

Residents can donate gently used items to be reused and also recycle scrap metal and electronic waste. A shredder will be on hand to shred personal papers.

Groups like the Community Center of Northern Westchester, Adopt-a-Dog, Recycle-a-Bicycle and Furniture Sharehouse.

The event used to be held twice a year, but the recycling committee decided to hold it once a year to increase participation.

“This is all for a good cause,” Linda Trummer-Napolitano, the co-chair of the North Castle Recycling Committee said. “It keeps things out of the waste stream.”