All that snow in New England may make your property look as pretty as a calendar shot, but it won’t do you any favors if you’re trying to buy or sell a house.

The storms that have dropped an epic 8 feet of snow are causing grief for the real estate industry.

Some real estate agents have had to cancel nearly a month of weekend open houses because of the poorly timed snowstorms. Others have had to brace prospective buyers about to tour homes showing the ravages of winter, including leaky walls and ceilings caused by a buildup of ice on the roof.

Agents complain that deals are being held up because inspectors are unable to get a look at roofs, septic tanks and other features buried under mounds of snow and ice.

And sellers are grumbling about how difficult it is to move out of their homes in the treacherous weather.

“Honestly, every day is a new issue,” said Kate Lanagan MacGregor, a real estate agent in Mattapoisett, as she rattled off some of her recent struggles. Her latest: trying to empty a newly sold house of the furniture her company had used to “stage” the place for prospective buyers.

“Usually, you can just run up and grab your furniture. Now, the driveway’s not plowed, there’s no path shoveled and you can’t physically get your stuff out the door,” she said.

“We were literally pulling washers, dryers, furniture sets out of the house with a dolly and a strap and dragging them through the snow,” she said from her new home in snow-free Phoenix, Arizona. “I still have bruises from it.”

Jeremy Madore said he and his wife are closing on a four-bedroom home in Leominster that they found just weeks ago, in the throes of the snowstorms. He said a home inspector had to clear away a chunk of the snow-covered roof to assess its quality.

Now they’re watching to see how the barn’s roof holds up under the weight and what happens to the basement when the snows finally melt. 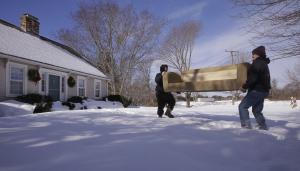 “It was definitely more aggravating home shopping in this weather,” Madore said. “We climbed over snowbanks and icy, slippery steps. I brought my snow pants and boots to make sure I wasn’t deterred from making a full circle around the property.”

Corinne Fitzgerald, president of the Massachusetts Association of Realtors, said she won’t have a clear picture of the effect on home sales until figures come in around mid-March. But February, she noted, tends to be the slowest month anyway.

Nationally, sales of existing homes fell slightly in January, in part because of the severe cold and snowy weather in New England and other parts of the country, according to Ian Shepherdson, chief economist at Pantheon Macroeconomics, a market forecasting firm. He said February data should show further declines.

Real estate agents said many sellers appear to be waiting until the weather clears to put their homes on the market, meaning a potentially busy spring. But winter can also hold certain opportunities.