Luxury-home buyers are returning to adjustable-rate mortgages, despite pitfalls that pushed many homeowners into foreclosure during the housing bust.

The pitch? A lower interest rate — at least for a period — than a fixed-rate mortgage means savings could be huge. 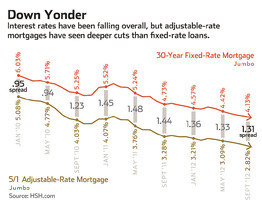 ARMs have a fixed rate for a certain number of years before they become variable, rising or dropping depending on prevailing interest rates. A five-year fixed rate is typical, though the time period can vary and be as long as seven or 10 years. As the loan’s rate changes, so does the monthly payment, possibly increasing or shrinking by thousands of dollars.

Lenders say high-net-worth buyers face relatively little risk because they can tap liquid assets to pay off a loan should a sudden spike in rates occur.

“They’re typically looking to the future and saying, ‘Here’s how I’m going to strategize based on my assets,’ ” says Tony Caruso, mortgage loan officer for PNC Wealth Management, where more clients have been choosing ARMs over the past two years.

ARMs accounted for just 4.2% of all mortgage applications in July, according to the Mortgage Bankers Association. But they had a 34.9% market share of the number of private home loans originated that month, according to data compiled for The Wall Street Journal by LPS Applied Analytics, a division of mortgage-data firm Lender Processing Services.

Rates on a jumbo 5/1 ARM — where the rate remains the same for the first five years and then adjusts annually — average 2.82%, compared with 4.06% on a 30-year fixed-rate jumbo, according to mortgage-info website HSH.com. Over the first five years, borrowers with the 5/1 ARM would save nearly $90,900 in interest on a $1.5 million mortgage compared with a fixed-rate jumbo.

Lenders also prefer ARMs, though for different reasons. When the Federal Reserve raises rates, banks have to increase the rates they pay out on deposit accounts, but they receive bigger interest payments from ARM borrowers whose rates rise. “From a bank’s perspective, it’s a much safer asset to hold if it’s an ARM,” says Mike Fratantoni, vice president of research at the Mortgage Bankers Association.

For that reason, not every lender will offer a home buyer both mortgage options. Here are possible risks associated with ARMs.

Nowhere to turn: ARM borrowers could refinance into a fixed-rate mortgage when rates rise, but rates on the fixed-rate loans could be just as pricey as ARMs at that point.

Home equity could derail a refinance: Borrowers who decide to refinance out of an ARM will need enough home equity to do that, and so should consider making a down payment of at least 30% when they buy the home, says Kevin Miller, chief executive of Aspire Financial Inc., a mortgage lender that mostly provides fixed-rate mortgages. Otherwise, if home values drop, they may have to pay down some of the loan amount to refinance, or be forced to stay with their current mortgage.