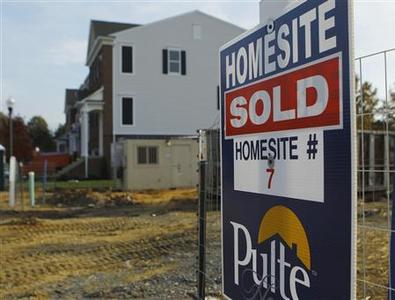 The Commerce Department said on Wednesday that new home sales increased 5.7 percent to a seasonally adjusted 389,000-unit annual rate — the fastest pace since April 2010, when sales were boosted by a tax credit for first-time home buyers.

Although sales in August were revised down to a 368,000-unit rate from the previously reported 373,000 units, the tenor of the report was relatively strong, with the median price of a new home rising 11.7 percent from a year ago.

The quickened pace in the housing sector is good news for the economy, but it remains one of the few bright spots.

“Housing is now a positive for the economy after years of being a drag, but it’s not enough to counteract the slowdown in manufacturing, which was the star,” said David Berson, chief economist at Nationwide Insurance in Columbus, Ohio.

A second report showed only a modest pick-up in factory activity this month amid a darkening cloud of economic uncertainty at home and slower growth abroad.

The home sales data was the latest to show the housing market on the mend from its brutal collapse in 2006, which dragged the economy through its worst recession since the Great Depression.

Rising sales are pushing down the stock of unsold properties on the market, lifting prices and giving builders more confidence to take on new projects.

Demand for housing is being driven by a steady rise in the number of U.S. households, which had declined during the recession as financially strapped Americans moved in with family and friends. Modest job gains, increased job security and record low mortgage rates are encouraging many to seek home ownership.

The U.S. Federal Reserve has targeted housing as a channel to boost growth, announcing last month that it would buy $40 billion in mortgage-backed securities per month until the outlook for employment improved substantially.

The Fed’s monetary policy committee on Wednesday stuck to its ultra accommodative stance even as it acknowledged that some parts of the economy, including the housing market, were looking a bit better.

While the Fed’s stimulus is supporting the consumption side of the economy, concerns about domestic fiscal policy and slowing global demand are hobbling the production side.

In a separate report, financial information firm Markit said its U.S. “flash,” or preliminary, Purchasing Managers Index for the manufacturing sector edged up to 51.3 this month from 51.1 in September. A reading above 50 indicates expansion.

A modest rise in output helped boost business conditions in the sector, which suffered its weakest quarter in three years during the July-to-September period.

But fewer orders from domestic clients and a fifth straight monthly decline in overseas demand for U.S. goods indicated manufacturing was acting as a drag on growth and employment, said Markit Chief Economist Chris Williamson.

“Purchasing managers report that the key to the ongoing weakness remains uncertainty among customers in export markets, notably Europe and Asia,” he said.

The slowdown in factory activity is largely the result of fears that the U.S. Congress might fail to avoid the automatic tax hikes and government spending cuts that will suck about $600 billion out of the economy next year.

The housing data, however, showed no signs yet that the so-called fiscal cliff has crossed the radar of ordinary Americans.

The inventory of new homes on the market remained near record lows in September, although some economists worry a pick-up in building activity could undercut the market if sales do not rise significantly further.

At September’s sales pace it would take 4.5 months to clear the new homes on the market, the fewest since October 2005 and down from 4.7 months in August.

Sales last month were up in three of the four regions. They tumbled 37.3 percent in the Midwest.