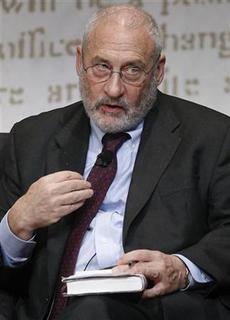 The Columbia University economics professor said in an interview with Reuters TV that the two men have shied away from discussing the uneven U.S. housing market recovery because neither has concrete solutions for helping financially strapped homeowners and both are wary of offending the banks.

“I find that shocking” that neither has talked about housing market issues, Stiglitz told Reuters. “It is one of the things that precipitated the crisis. In some sense, they don’t want to offend the banks … . The banks have been a major problem to doing something about the problem.”

Stiglitz, who won the Nobel Prize for economics in 2001, spoke less than two weeks before what could be one of the closest presidential elections in U.S. history.

Romney was 1 percentage point ahead of Obama in Wednesday’s Reuters/Ipsos daily tracking poll in a race that is effectively a dead heat ahead of the November 6 vote.

The biggest weak spot in the domestic economy continues to be the housing market, despite signs of life in cities like Las Vegas, Phoenix and Miami – some of the hardest-hit areas during the financial crisis.

Miami home prices rose again in September, marking 10 consecutive months of appreciation, according to the 26,000-member MIAMI Association of REALTORS.

But there are many skeptics about how solid the recovery is and whether some uptick in home building has been the result of the Federal Reserve’s recent action to buy mortgage securities to reduce borrowing costs.

On Wednesday the Mortgage Bankers Association reported that last week, applications for new mortgages in the United States registered their biggest percentage decline in a year as rates for a 30-year mortgage rose 6 basis points to an average of 3.63 percent, the highest in a month.

The country is still way off from its long-term average rates in construction, housing sales and foreclosures.

About 3.8 million homes have been foreclosed on since the financial crisis began in 2008, according to CoreLogic, which also reports another 1.3 million homes are in some stage of foreclosure.

Stiglitz said any meaningful discussion about housing must include a plan for reducing the level of mortgage debt held by U.S. homeowners, given how far property values dropped during the crisis.

“As soon as you start talking about mortgages and the housing problem, both sides feel uncomfortable,” Stiglitz said.

“Obama hasn’t done enough and Romney has no real proposals,” and yet both candidates have raked in millions of dollars from the banks in campaign contributions, he said.

Stiglitz is not the only economist who argues that reducing mortgage debt is the surest way to boost the economy by providing financial relief to struggling homeowners.

The Financial Times reported on Wednesday that if Obama is re-elected, he will push to oust Edward DeMarco, the acting head of the Federal Housing Finance Agency, who has opposed using principal reductions to reduce debt obligations on mortgages guaranteed by Fannie Mae and Freddie Mac.

The FHFA is the chief regulator of the two government-sponsored mortgage finance firms.

Others have promoted even more controversial measures to fix the housing market, like giving local governments the power to seize distressed mortgages through eminent domain so they can be restructured to enable homeowners to remain in their residences.

The idea of using eminent domain, which has been vigorously opposed by Wall Street bond investors, is being considered by San Bernardino County in California and a handful of other communities across the country.

Stiglitz said there are some good ideas about the restructuring of mortgages but neither candidate is addressing them.

One way or the other, the candidates could consider reduction in mortgage principal but “the banks don’t want to do it because they would be forced to recognize losses.”