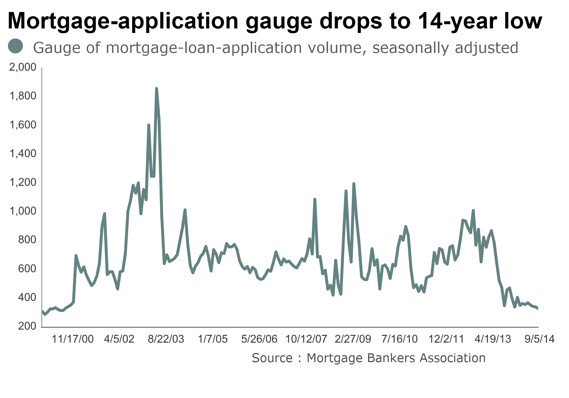 Here’s a fresh factoid sure to gratify housing bears: A broad gauge of mortgage applications recently hit its lowest level in 14 years, according to data released Wednesday.

The Mortgage Bankers Association reported its seasonally adjusted index, which measures the volume of mortgage applications, dropped more than 7% in the week that ended Sept. 5 to the slowest pace since the end of 2000. During that week, applications for loans to buy a home fell almost 3%, hitting their lowest level since February, while refinancing applications tumbled almost 11%, reaching the weakest result since late 2008.

But it may be too soon to dance on the housing market’s grave. There’s volatility in any weekly series. And there were at least two factors in the most recent weekly report that may be throwing off results.

First, the week that ended Sept. 5 contained Labor Day (which fell on Sept. 1). While MBA adjusted its data for the holiday, there may still be some distortions.

“The Labor Day holiday is one of the holidays where it’s hard to predict how people will respond,” said Doug Duncan, chief economist at federally controlled mortgage-finance giant Fannie Mae who added that he expects a “bounce back” in future mortgage-application readings.