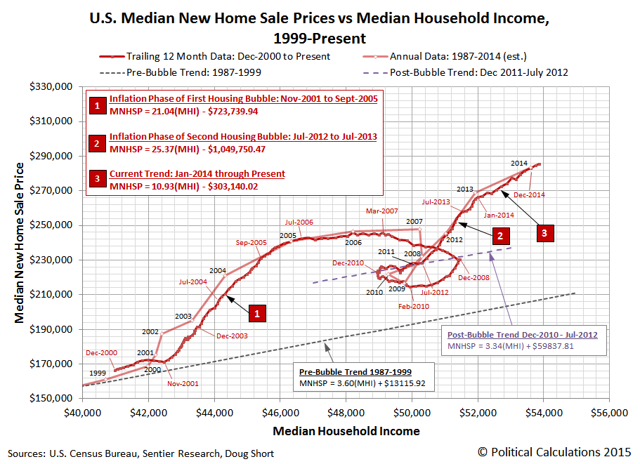 The good news is that rate of increase is less than half that observed during the primary inflation phases of the first and second housing bubbles in the U.S. The bad news is that rate of increase with respect to household incomes is still 2.7-3.3 greater than those recorded during periods of stable growth in the periods preceding the inflation phases of real estate bubbles.

As we noted in our previous installment, the current pace of growth is consistent with that observed in the latter portion of the inflation of the first housing bubble.

Now, it’s important to note that this situation doesn’t mean that a new crash in housing prices is imminent, or even likely. Now that real estate investors have established a shortage of affordably priced homes in the U.S. market, U.S. homebuilders are now better able to exploit the situation by building more affordably priced homes, which several have begun to do in recent months.

Note to America’s builders: less-expensive homes are starting to move.

Purchases of new homes climbed 7.8 percent from the previous month to a seasonally adjusted 539,000 annualized pace in February, a seven-year high, according to the latest U.S. government report. Perhaps the best news for the housing industry as a whole came in the breakdown of sales, by price.

The shifting sales mix of new homes toward lower-priced homes is prompting an increase in sales volumes, which is a desirable outcome for the current market. Since November 2014, when the median new home sale price in the U.S. peaked at $302,700, the median sale prices of new homes has fallen in each month since, and in February 2015, stands at a preliminary value of $275,500. This figure will be revised several times over the next several months.