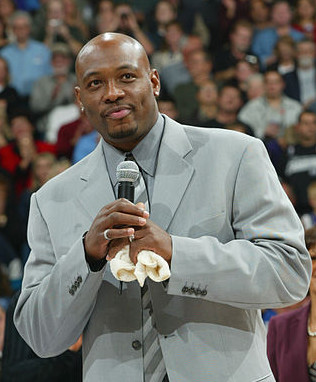 You might expect to find a sports bar, built-in barbecue, basketball court and waterslide at a fraternity house or the Vegas Strip — not in your own backyard. But in a superstar athlete’s home, boys and their toys are taken to another level.

Former NBA Rookie of the Year Mitch Richmond has lived in this decked-out Calabasas crib with wife Juli and their three kids since 2004. The retired shooting guard is now selling the place for $9.495 million.

Located at 25374 Prado De La Felicidad, Calabasas, CA 91302, the sprawling Mediterranean mansion has 6 bedrooms and 9 bathrooms over 10,475 square feet. In addition to several backyard amenities, the home has a luxurious master suite, gourmet kitchen and a state-of-the-art gym with a steam room and sauna.

A sports bar with framed jerseys on the wall is a reminder of “The Rock’s” legacy as a six-time NBA All-Star and five-time All-NBA Team member. Although Richmond fell short in the 2013 vote for induction into the Basketball Hall of Fame, his career was nonetheless impressive, playing for the Golden State Warriors, Sacramento Kings, Washington Wizards and Los Angeles Lakers.

Richmond is currently back working with the Warriors as a scout. He’s also been a minority investor helping to persuade the NBA ownership relocation committee to keep the Kings in Sacramento.