Update: Watching existing home “for sale” inventory is very helpful. As an example, the increase in inventory in late 2005 helped me call the top for housing.

And the decrease in inventory eventually helped me correctly call the bottom for house prices in early 2012, see: The Housing Bottom is Here.

And in 2015, it appeared the inventory build in several markets was ending, and that boosted price increases.

I don’t have a crystal ball, but watching inventory helps understand the housing market.

Inventory, on a national basis, was unchanged year-over-year (YoY) in July, this followed 37 consecutive months with a YoY decline.

The graph below shows the YoY change for non-contingent inventory in Houston, Las Vegas, Sacramento (through August) and also Phoenix (through July) and total existing home inventory as reported by the NAR (through July). 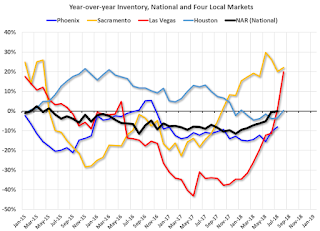 Note that inventory in Sacramento was up 22% year-over-year in July (inventory was still very low), and has increased YoY for eleven consecutive months.

Also note that inventory was up 20% YoY in Las Vegas in August (red), the second consecutive month with a YoY increase.

Houston is a special case, and inventory was up for several years due to lower oil prices, but declined YoY recently as oil prices increased.  Inventory was up slightly in Houston in August (but the YoY change might be distorted by Hurricane Harvey last year).

Inventory is a key for the housing market, and I am watching inventory for the impact of the new tax law and higher mortgage rates on housing.   I expect national inventory will be up YoY at the end of 2018 (but still be low).

This is not comparable to late 2005 when inventory increased sharply signaling the end of the housing bubble, but it does appear that inventory is bottoming nationally (but still very low).