On Manhattan’s East Side near the East River is Sutton Place, which includes some of the city’s most exclusive enclaves.

The neighborhood takes its name from Effingham B. Sutton, a 19th-century shipping merchant and entrepreneur who made his fortune during California’s 1849 Gold Rush and then built brownstones on 57th and 58th streets in Manhattan. By the early 20th century, the area became filled with tenements, but wealthy families like the Vanderbilts later transformed it.

The ritziest part of the neighborhood is dotted with pre-war buildings and properties with intricate facades designed by Rosario Candela. Most of the apartments are in exclusive co-ops whose boards require buyers to put down at least 50% cash, local brokers say.

“It’s a very specific client—a client that is looking for a lot of peace and quiet,” says Jacky Teplitzky of Prudential Douglas Elliman Real Estate. “Some people will say it’s inconvenient, that you don’t have a supermarket nearby, but another person will say, ‘That’s great. There is tranquility there. Not a lot of people are walking around me.'” 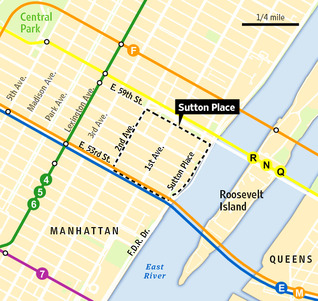 The somewhat isolated location is, indeed, a problem for some. “A lot of people have complained about transportation because the subway is on [Lexington Avenue],” says Jennifer Breu of Heddings Property Group.

That’s getting closer to changing now that the long-delayed Second Avenue subway is moving ahead and the portion between 59th and 96th streets is slated to be largely completed by the end of 2016.

Of course, public transportation wouldn’t concern many of Sutton Place’s residents, where stretch limousines often wait outside the doorman-attended buildings on weekday afternoons.

In addition to co-ops and condos, there are some townhouses in the neighborhood. A five-story renovated townhouse at 15 Sutton Place is currently available for $10.75 million. The 10-room home, built in 1899, has views of the East River, four fireplaces, an elevator, high ceilings, separate staff quarters, a ground-floor patio and a terrace, according to the listing.

New construction in the area is limited, but 441 E. 57th St., between First Avenue and Sutton Place South, is a new addition. The 15-story condominium building with six residences has a glass facade that makes it stand out among the brick buildings surrounding it.