JetBlue founder David Neeleman and his wife, Vicki, are asking just under $11 million for their 13,300-square-foot mansion in New Canaan, Conn. 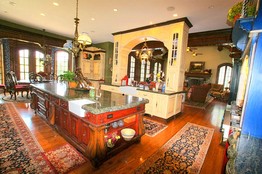 Ms. Neeleman spent a year designing the stone mansion and hired a builder and designer from the West Coast, where the couple had previously lived, to work on the home. It was completed in 2008 and has eight bedrooms, eight fireplaces, a pool and a gym with a basketball court. “There are so many homes in New Canaan that are the same thing,” Ms. Neeleman says. “I wanted to do something unique.” She says their prior 8,000-square-foot home nearby felt “squished” with their nine children.

The couple spent more than $17 million on the home and have put it on the market because they may relocate, Ms. Neeleman says. Mr. Neeleman has started a budget airline in Brazil. Lynne Leonard of Lynne Leonard Realty has the listing.

Max Weinberg and his wife, Rebecca, are asking $6.5 million for a seven-bedroom, Colonial-style home in Middletown, N.J.

The 8,900-square-foot house, above, is the first home that the prolific real-estate flippers, who also have a Los Angeles home on the market, built from the ground up. The home has a soundproof music room, a movie theater with a lobby and concession area and a pool. There’s also a guest house, a 3,200-square-foot barn and a three-acre skating pond that has bleachers and stadium lighting. “This house was great; it should serve another family,” says Mr. Weinberg, 59, saying he’s downsizing now that his children are grown. The couple is building a smaller home nearby.

The house sits on almost 17 of 40 forested acres that Mr. Weinberg bought in 1997 for less than $1 million. He’s keeping the remaining 23 acres. Since the end of “The Tonight Show With Conan O’Brien” Mr. Weinberg has continued to play with Bruce Springsteen’s E Street Band and his own band. Mary Burke of Heritage House Sotheby’s International Realty has the listing.

Calvin Klein co-founder Barry Schwartz has put back on the market an undeveloped three-acre parcel in Miami Beach, Fla., for $21.9 million, about 9% off his $23.9 million asking price in 2008.