For the first time in 55 years, Philip Johnson’s first commissioned residential home is up for sale. The famed modern architect, known for his inventive use of glass, designed and built this Bedford, N.Y., property known as the Booth House in 1946.

The two-story home with floor-to-ceiling windows overlooking the surrounding woodlands was a precursor to Mr. Johnson’s iconic Glass House in New Canaan, Conn., built in 1949. 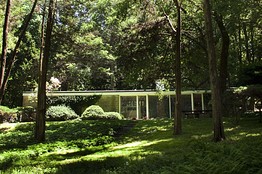 The home belongs to former architect Sirkka Damora and her late husband, Robert. The couple rented the home before purchasing it in 1955 for $23,500.

“We were intrigued by it because it was a modern house and we were both in architecture,” Ms. Damora said. “We knew it was Philip Johnson’s house but the name didn’t mean much at the time.”

Mr. Damora, an architect and architectural photographer, renovated the basement of the three-bedroom home to include more living space and added an entire wall of glass. He also completed the home’s kitchen and bathroom, which Mr. Johnson never finished. In the early 1960s, he added a separate building with 10-foot ceilings and a 20-foot skylight, which doubled as an office and photography studio.