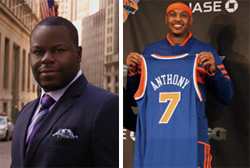 Rumored to be scouring New Jersey for a permanent home, Carmelo Anthony is currently renting four Upper West Side apartments, and his broker hinted the Knicks star refocused his search to Downtown Manhattan, the Daily News reported. Two of the apartments are in the Aldyn and Ashley buildings both off West End Avenue — for easy access to the West Side Highway and the Knicks’ Westchester practice facility. One of them is a 3,600-square-foot four-bedroom penthouse at the Aldyn, which Anthony rents for $19,000 per month. The Ashley, where singer Mary J. Blige also resides, lists a basketball court among the building’s amenities. Anthony’s broker, Prudential Douglas Elliman’s Prince Dockery, shot down earlier reports that Anthony and his wife, MTV’s La La Vasquez, were looking outside the Big Apple. “We looked for apartments with similar qualities as Carmelo’s other homes in Denver in Los Angeles,” said Dockery, who specializes in high-end Lower Manhattan properties. “The key thing is the family wanted to be in New York and didn’t opt for a 10,000 square-foot home in Westchester or New Jersey.” Anthony will make more than $100 million through 2015. [NYDN]

Seriously, you think that is his real name?

Please get him settled fast. We need four wins against the Celtics.

$100 million to play a game we all played in elementary school what about the engineer, teacher and the doctor progressing society forward.

#5, do you forget that this is capitalism?

wow I thought to my self i would never be able to work with sports stars, Since this dude has 1 listing in his pipeline makes me feel I can do the same.

There are a lot my engineers in the world than NBA basketball stars. He is top 5 in the game, he deserves 100 Million.

Melo needs to learn how to “post up” and mix up his offensive game…he shoots too many Jumpers!! $20K in rent per month…that’s insane…move to Greenwich,Connecticut and own some LAND!! Better yet, buy your first apartment building and live for FREE…..

The Real Deal reserves the right to delete any comment it finds to be rude, obscene, racist, sexist, bigoted, irrelevant or repetitive, as well as inappropriate comments about anyone’s personal appearance or advertisements. The Real Deal does not endorse any comments posted on its website nor does it verify the veracity of comments or the identity of posters.