Although the economy grew in the third quarter, data continues to show a “sluggish recovery overall” according to Fannie Mae’s Economic & Strategic Research Group.  Total growth in U.S. gross domestic product since the lows of 2009 has been 7.2% compared with average growth of 16% for previous economic recoveries since the 1960′s.

Despite the absence of wage growth, consumer spending was the biggest driver of GDP growth in the third quarter, accounting for nearly 70% of GDP.  Inexplicably, consumer confidence has increased even as most business anticipate slowing economic growth.  Fannie Mae economists expect the disconnect between consumer and business confidence to converge as  confidence about future economic growth wanes due to the inability of Washington to deal with the so called “fiscal cliff” and ballooning federal deficit.

Fannie Mae Chief Economist Doug Duncan notes that “The tone of the economic data we’ve seen during the past month has been modestly favorable, but our expectations for growth this year remain subdued.  While the pick-up of activity in the third quarter is encouraging, it is compared to the weak pace seen in the second quarter and doesn’t portend a robust recovery in the near term. More encouraging, perhaps, is that the slight increase in consumer spending appears to have fed into the overall housing market data, particularly home sales and starts.”

The housing market has seen a modest recovery with gains in both existing and new home sales.  Sales prices have increased by 5% year-over-year which is the largest increase since 2006.  Fannie Mae expects the recovery in housing to contribute to GDP in 2013, but notes that housing “accounts currently for only 2.5% of GDP” and “such growth isn’t likely to provide a substantial boost to the economic recovery.”

Although much of the mainstream press has been gushing over the recovery in housing prices, the recent blip up in home values is almost imperceptible on a long term chart of house prices. 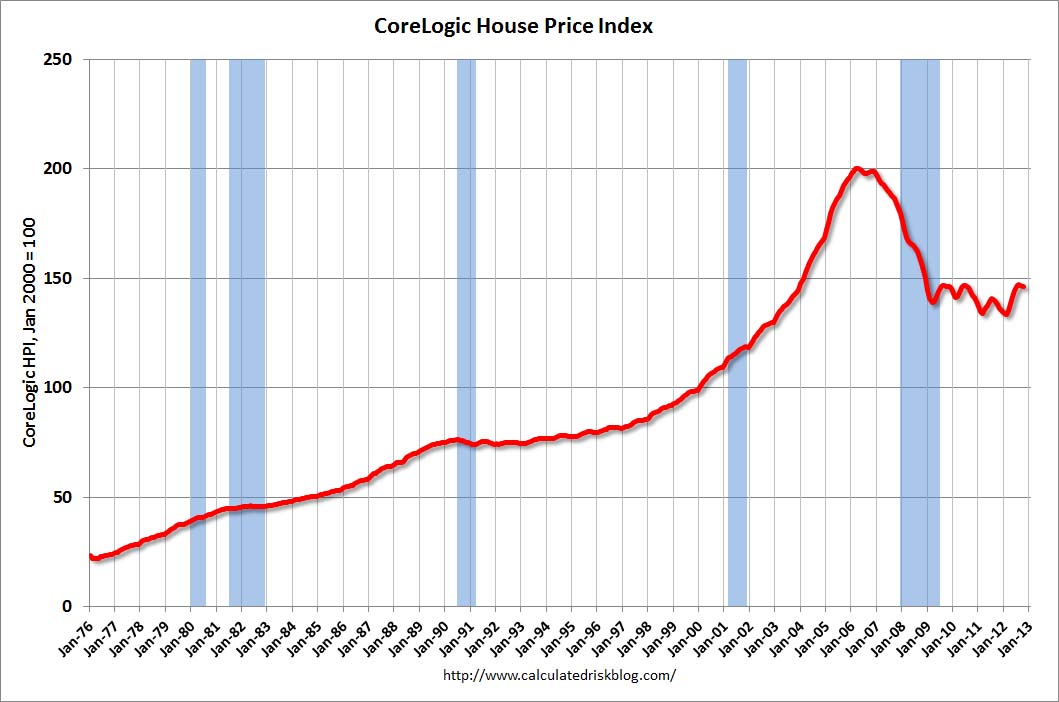 Housing prices declined at a dramatic pace during 2007-2008 and have slowly stabilized since then as excess inventories and foreclosures worked their way through the system.  A return to the days of steadily appreciating home values now depends on consistently strong GDP and wage growth, something that still eludes us five years after the housing and banking crisis first began.