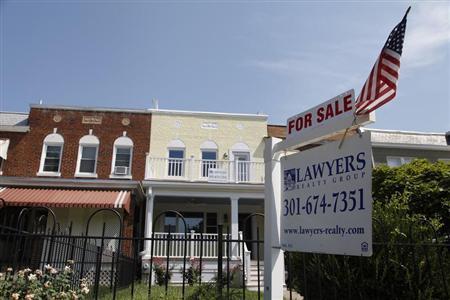 A U.S. flag decorates a for-sale sign at a home in the Capitol Hill neighborhood of Washington, August 21, 2012.

Home prices rose in November to rack up their best yearly gain since the housing crisis began, a further sign that the sector is on the mend.

But data on consumer confidence on Tuesday was less encouraging, with moods falling to their lowest level in more than a year as Americans became more pessimistic about the economic outlook and their financial prospects.

The S&P/Case Shiller composite index of 20 metropolitan areas gained 0.6 percent in November on a seasonally adjusted basis, in line with economists’ forecasts.

Prices in the 20 cities rose 5.5 percent year over year, making for the strongest yearly price increase since August 2006 when prices were on their way down.

“This is continuing a trend in place for the better part of a year,” said Omair Sharif, U.S. economist at RBS Securities in New York. “This is another indication that the housing rebound is fairly entrenched at this point.”

The housing market became a bright spot for the economy last year as prices rose and inventory tightened. The sector is expected to contribute to economic growth in 2013, though a number of challenges remain, including tight access to mortgages and on-going foreclosures.

It was the 10th month in a row that prices have increased, the longest string of gains since before 2006. Last year’s rise in prices beat a nine-month consecutive run in 2009 and 2010, when the market was boosted by a homebuyer tax credit.

Separate data from The Conference Board showed an index of consumer attitudes fell to 58.6 in January from an upwardly revised 66.7 the month before, falling short of economists’ expectations for 64. It was the lowest level since November 2011.

At the start of the year, U.S. politicians came to an agreement that averted the so-called fiscal cliff of spending cuts and tax increases that had been set to come into effect.

But the deal did raise taxes for many Americans, while a payroll tax holiday came to an end. Also, a number of budget decisions remain.

“Consumers are probably pretty unhappy to notice that their payroll taxes have gone up,” said David Sloan, economist at 4Cast Ltd in New York.

U.S. stocks pared slight gains immediately after the report was released, while the euro rose to a session high against the dollar.

Consumers’ views on the labor market were also weaker, with the “jobs hard to get” index rising for the first time since September.

Home prices on a non-adjusted basis slipped 0.1 percent. The non-adjusted numbers showed prices fell in about half of the cities covered by the survey, with the winter months typically a weak period for housing, the survey said.

Phoenix, which saw its housing market rebound sharply last year, led with the biggest yearly gain at 22.8 percent. New York was the only city to fall, down 1.2 percent from the previous year.