Notes: CoreLogic reports the year-over-year change. The headline for this post is for the change from December to January 2011. The CoreLogic HPI is a three month weighted average of November, December and January and is not seasonally adjusted (NSA).

The January data shows home prices continuing to slide. Mark Fleming, chief economist with CoreLogic, said, “A number of factors continue to dampen any recovery in the housing market. Negative equity, which limits the mobility of homeowners, weak demand and the overhang of shadow inventory all continue to exert downward pressure on housing prices. We are looking out for renewed demand in the coming months as the spring buying season gets underway to hopefully reduce the downward pressure.” 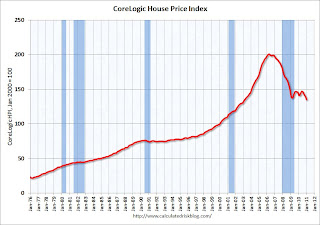 Click on graph for larger image in graph gallery.