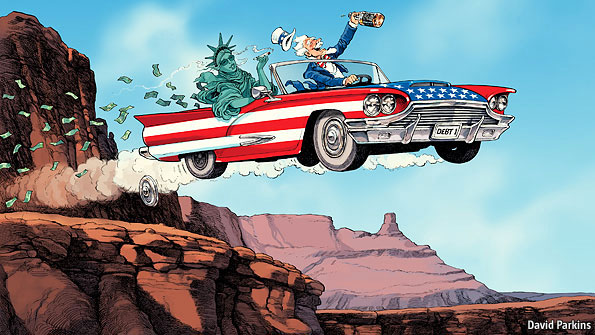 BEN BERNANKE, the chairman of the Federal Reserve, is not known for his turns of phrase. But “fiscal cliff”—the term he coined to describe the tax increases and spending cuts that will hit America’s economy at the start of 2013 unless politicians agree to avert them—has inspired songs (“The fiscal cliff is a danger zone/It’s where grown men go when budgets are blown,” croons Merle Hazard, a satirical singer) and television comedy (Jon Stewart’s “The Daily Show” calls it “Cliffpocalypsemageddonacaust”).

There have also been more serious consequences. The shadow of the fiscal cliff has depressed corporate investment. American consumer confidence has started to wobble. Growth is slowing, perhaps to as little as 1% in the fourth quarter. Policymakers around the world are fretting: Australia’s central bank has just cut rates, citing the cliff as a worry.

These worries are understandable but overblown (see article). In the short term the risk of economic catastrophe is minimal. The real threat—and the real opportunity for Barack Obama—lies in the medium and long term.

The long and the short of it

If lawmakers do nothing, America faces fiscal tightening in 2013 worth up to 5% of GDP. That is a Greek-scale squeeze. It would not take many months for it to push the country into recession. A complete stand-off between Mr Obama and Congress would lead to disaster even sooner, for unless America’s lawmakers vote to increase the “debt ceiling” (the maximum amount of debt that the Treasury can issue) by around March, the federal government will be unable to pay its bills—including, potentially, its bondholders. The damage from a self-induced default would dwarf even that from the fiscal cliff.

However, precisely because the consequences of prolonged stalemate would be so disastrous, there almost certainly will not be one. Either towards the end of December, or early in 2013, Mr Obama and the Republicans in Congress are likely to reach an agreement that avoids most of the tax increases and spending cuts, and raises the debt ceiling. Elements of that deal are becoming a little clearer: the Republicans seem to have given in to Mr Obama and accepted that wealthier Americans will have to pay more tax, probably through both limited deductions and higher tax rates.

But there are still two big reasons for America—and the rest of the world—to worry. First, depending on the details of the deal, there could still be too great a fiscal squeeze in 2013. Second, and more important, entitlement spending is America’s biggest long-term fiscal challenge. Any fiscal deal must reform Social Security (pensions), Medicare (for the old) and Medicaid (for the poor). Mr Obama has been demanding tax increases of $1.6 trillion over the next ten years, but has offered entitlement cuts of only some $400 billion. He needs to increase the latter, to entice the Republicans into a deal and because it is the right thing to do.

America has a chance to straighten out not just its finances, but also the highly polarised politics that underpin them. Republicans believe passionately that higher taxes will wreck the economy; no Republican in Congress has voted for higher income taxes since 1990. Democrats believe equally passionately in the sanctity of health-care and pension schemes for the old. The last time pensions were overhauled was in 1983. Since then politicians have added handouts even as medical costs have soared and the population has aged. The result is a gaping, and growing, fiscal hole. America’s underlying “structural” budget deficit is almost 7% of GDP. Among rich countries, only Japan’s is bigger.

Since the financial crisis America’s ideological stand-off has, as it happens, produced sensible short-term fiscal policy. The United States cushioned its recession with stimulus and, by keeping fiscal policy loose, has supported the recovery. With many other rich countries tightening further and faster, that did the world a service.

In today’s weak recovery the same logic holds. With bond yields near record lows America need not, and should not, tighten policy too fast. Some tightening in 2013 is both expected and manageable. Most forecasters expect around 1.5% of GDP, as measures that were always designed to be temporary, such as the payroll-tax cut, expire. But there is a danger that a minimalist deal would result in too big a squeeze. An agreement that extended tax cuts only for the middle-class, for instance, would imply a tightening of some 3% of GDP in 2013. That is too fast.

To preserve the recovery, a deal must be less draconian. It should focus on long-term entitlement reform rather than short-term cuts. That is good politics, since overhauling entitlements is a Republican priority. And it is good economics. Spending on the old will rise faster in America than in most other rich countries. That is partly because Europe’s austerity plans have already delivered some fairly tough pension reforms, but mainly because America’s health-care costs are so high and rising fast.

Mr Obama has the opportunity to fix this and to reform entitlements—something that has eluded every president since Ronald Reagan. The combination of his re-election and the fiscal cliff has forced the Republicans to show some flexibility on increasing the tax take. That victory has given Mr Obama leverage over the left of his own party. If he uses it to force real change, from lower indexation of pension payments to tougher means-testing of health-care benefits, he will transform America’s long-term fiscal outlook.

So far the president has shown lamentably little boldness, arguing that pensions should not be part of any deal and that health-care costs can be controlled by reducing payments to providers, such as hospitals (as opposed to cutting benefits). In private, things may be different. Mr Obama is said to want a big deal that not only averts the fiscal cliff but sets America on a sustainable fiscal course. Such a deal is within his reach. He should grasp it.