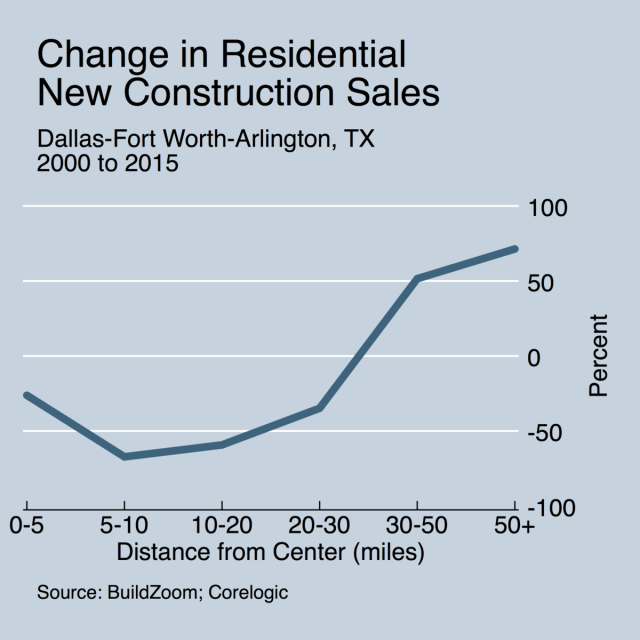 A shortage of homes for sale has bedeviled U.S. house hunters in recent years, so why don’t builders build more? One problem is that they’re running out of lots to build on—at least in the places that people want to live.

Cities that were sprawling before the Great Recession have begun to sprawl again. Space-constrained cities, meanwhile, have run out of room to build. That reality has spurred developers to focus on center-city neighborhoods where high-density building is allowed—and new units command exceedingly high prices.

At some point, said Issi Romem, chief economist at BuildZoom, vacant lots in desirable urban neighborhoods will run out. “If you have three days of rations left, you’ll be fine on day one, two, three,” said Romem, author of new research demonstrating home construction patterns. “On day 4, you have a problem.”

Historically, cities grew outward, as builders developed tracts on the periphery—then filled in the land between various developments over time. When these so-called expansive cities of the South and Southwest run out of infill land on which to build, developers simply pushed out further.
Some of these cities, like Austin and Nashville, have seen downtown boomlets. But more broadly, the building trends in those metros looks more like Dallas: Inside a 30-mile radius from the center of the city, new home sales decreased from 2000 to 2015. Outside the radius, though, sales are up by more than 50 percent. The same trend has played out to varying degrees in Phoenix, Atlanta, and San Antonio, among other cities.

In America’s most expensive cities, however, that dynamic has been turned inside out (or perhaps outside in). New construction trends in places like New York City have been tightly focused on downtown clusters where zoning rules permit high-density construction. These cities stopped expanding their geographic footprint decades ago, leaving builders to concentrate on finding buildable lots inside existing boundaries. As those lots became harder to find, land prices increase, reducing options for builders hoping to turn a profit. Developers building on pricey lots generally seek to offset land prices by building more densely, Romem said. In many cases, that means focusing on high-end apartments that offer better profit margins. The wealthiest residents are the only ones who can buy, and a vicious cycle is created.

Lately, there has been some give as oversupply of new high-end apartments forces landlords in New York and San Francisco to drop prices on expensive aeries. Still, the broader pattern continues to lean in the direction of higher rents.

What happens next depends on whether voters and their elected officials rewrite zoning rules to allow denser construction, said Romem, particularly in neighborhoods currently limited to single-family homes. Under current rules, he said, it’s unlikely new housing will get built at affordable prices, pushing city-dwellers into a game of musical chairs rigged to favor the rich.

“As long as these cities continue to do well economically, you’re going see poorer folks replaced by richer folks,” he said. “You’re going to read stories about teachers not being able to find place to live.”

According to a new report from Douglas Elliman and Miller Samuel, the average sale price for luxury condos in Miami and Miami Beach plunged 30 percent year over year in the third quarter, to $948,700 and $2.6 million respectively.

The declines mark another step down for high-end real estate in the area, which had experienced a boom after the financial crisis. It comes as buyers from Latin America are slowing to a trickle and uncertainty around the presidential election is causing wealthy Americans to pull back.

At the same time, luxury buildings that were started during the boom years of 2013 and 2014 are now starting to come online, creating a glut of high-priced homes and condos.

Miami’s results echo those from other cities in the U.S., where the highest priced real estate is faring the worst.

Luxury “is becoming a smaller part of the market due to the reduced emphasis at the top,” said Miller Samuel’s Jonathan Miller.

Inventory of luxury condos in Miami Beach jumped 30 percent in the quarter compared with a year ago, to 1,235. These properties are now sitting on the market for an average 126 days, more than double last year’s number.

In broader Miami, inventory rose 11 percent, resulting in a 40-month supply of luxury condos. Inventories for single-family homes in both areas are also higher.

Given these broad-based increases, Miller said the luxury real estate market in Miami is likely to get worse before it gets better.

Bankrate’s senior financial analyst Greg McBride isn’t sweating the new environment in mortgage rates.  December’s FOMC decision to start the upward climb one baby step at a time won’t really mean much to home sales in the larger scheme of things and most homeowners who wanted to refinance have already done so.

McBride sees rates on a 30-year fixed ending the year at 4 to 4½ percent or so—not much higher than the current 3.89 percent but higher than in past years.

More importantly, rates will not rise enough to deter sales.  “Rather, buyers and sellers will make their decisions based on conditions in their personal lives, such as downsizing with the kids move out,” McBride said in an interview with Real Estate Economy Watch

As for refinancing, there has been a lot of opportunity in recent years and demand is exhausted, he said.  And don’t look for a revival of demand for adjustable rate mortgages. “Consumers are still squeamish following the subprime crash, he said.  The mortgage market in 2016 will be fixed rate and heavily weighted towards purchase over refi loans.

Sparking the protest was a plan by Hong Kong-based Hutchison Whampoa Ltd. to build up to 3,500 new homes not far from London’s Canary Wharf financial district. Mayor Boris Johnson has approved the project.“These are the kind of homes that local people will never be able to afford,” said Cheryl Coyne, a 63-year-old semiretired schoolteacher.

“There are thousands of people in the borough who need homes, and instead they’re building flats for multimillionaires.”Average London house prices increased 18 percent in the first quarter from a year earlier, the most since 2003, to a record 362,699 pounds ($604,000), the Nationwide Building Society said.

Much of that increase stems from wealthy non-British investors seeking assets that would hold their value. Builders use advance sales, often to buyers from Asia, to help finance new projects. Foreign-born buyers made 69 percent of central London new-home purchases in the two years through June 2013, with 28 percent living outside the U.K., broker Knight Frank LLP said in October.

When the Malaysian owners of the Battersea Power Station project, on the south bank of the River Thames, sold the first 866 homes in just three days in January, more than half went to foreign buyers.

Citing rising mortgage rates and an unstable economy, the Federal Reserve said that it’s holding off on its decision to pull back on its bond-buying activity.

“Household spending and business fixed investment advanced, and the housing sector has been strengthening, but mortgage rates have risen further and fiscal policy is restraining economic growth,” the Fed said in a statement.

Many, including Inman News columnist Lou Barnes, had expected that the Fed would begin tapering today. U.S. and global bond markets have been highly reactive to the Fed’s taper talk.

Lewisboro is rich in natural areas and is a component of the biotic corridor. Two Westchester County Parks are on Lewisboro’s borders, and there are 6 town parks and several community preserves.

Ward Pound Ridge Reservation is Westchester County’s largest (4,700 acre) park. In addition to many trails, there are camping facilities and a Trailside Museum. The main entrance is on route 121 in Cross River.

Mountain Lakes Camp is a County park on the northern border of Lewisboro, with beautiful ponds and trails in the forest. The most popular trail leads to Look Out Point which is perched on top of a cliff overlooking Lake Waccabuc,Lake Oscaleta and Lake Rippowam.

Onatru Farm on Elmwood Road is one of Lewisboro’s preëminent parks and includes tennis facilities and playing fields as well as some town offices. This area also includes some walking trails.

The Lewisboro Town Park on Route 35 contains tennis courts, the town pool, ball fields, and outdoor basketball courts. When ice skating is available in winter, a sign is posted. There are also some walking trails in this park that connect to the adjacent Ward Pound Ridge Reservation.

The Leon Levy Preserve was acquired by the town in 2006 as open space. While some trails exist in this 370-acre (1.5 km2) parcel, as of 2008 additional horse and hiking trails are under development and parking is still limited.

The Old Field Preserve was obtained in 2003, and contains about 100 acres (0.40 km2) of woods, wetlands, and sizable old fields (thus, the name). The meadows will be preserved to support the birds and animals that are dependent upon this increasingly rare habitat.

Inventory is still high but the median price in Lewisboro shows a good increase in 2010.

The recovery of housing prices will take at least four more years, according to a monthly survey of 110 leading economists and real estate experts, significantly longer than previously estimated.

Housing prices will rise only 7.2 percent by 2014 and the aggregate value of U.S. single-family homes four years from now will be roughly $1 trillion less than the economists projected in May, said Terry Loeb of MacroMarkets, the firm conducting the survey, which is based upon the projected path of the S&P/Case-Shiller U.S. National Home Price Index over the coming five years.

”For the first time, in this month’s survey, our panelists provided their expectations through 2015. Less than 3% of the panel expects negative change in 2015, and at +3.7 percent, the average of the forecasts for that year is slightly higher than the average annual rate of national home price appreciation that prevailed in the decade prior to the historic bubble.  Yet, at +7.2%, the average projection of cumulative home price performance through 2014 reached its lowest point since survey inception for the second consecutive month,” said Robert Shiller, MacroMarkets co-founder and chief economist.

“The survey data we collected this year have consistently pointed to price stability in the intermediate- to long-term, which is reassuring in light of the volatility in actual home prices we have witnessed during the past few years.  However, most experts foresee a longer road to recovery, and materially lower price performance in the coming years than they did just a few months ago,” said Terry Loebs, MacroMarkets managing director.