Activity levels and selling prices for the domestic real estate market last peaked in 2005, two years after the prior peak of the economic cycle (i.e., GDP) in 2003 (at 4.4%). Thus, by preceding the 2008-09 recession, this most recent national housing bust set a precedent as the first in recorded history in which housing helped lead the economy down. 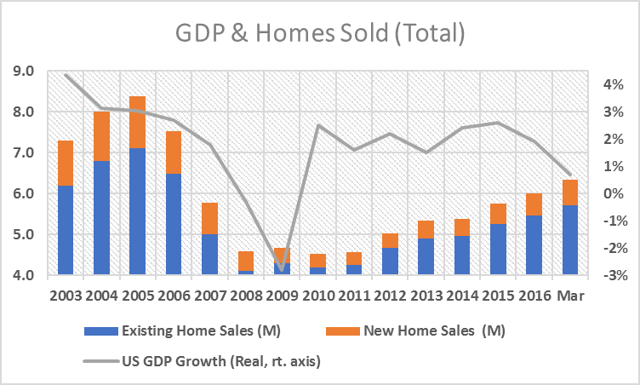 Sources: US Dept. of Labor (BLS), National Association of Realtors (NAR), US Bureau of Census.

Note: sales of existing homes account for >90% of all homes sold in the US, up from ~85% pre-crisis.

Even today, more than a decade after the start of housing’s precipitous decline, total US sales volumes (including new homes) remain nearly 30% below peak levels, and over 15% below the 2000-’05 average.

It is a different world post-crisis / housing bust, and residential real estate’s demographic hurdles remain high. For example, baby boomers, many of whom live on fixed income payments, are only beginning to downsize or move into managed care facilities.

The more pervasive demographic challenge to home-ownership rates – now below 64%, vs. more than 69% in 2004 – is posed by ‘echo boomers’, in their 20’s and 30’s. Born in the 80’s and 90’s these younger demo’s that nevertheless still account for the bulk of entry-level home purchases, more often favor renting over buying, a contrast to their parents and grandparents.

Thus, Entry-level home-buying now represents only about one-third of housing activity, down solidly from pre-crisis historical levels averaging 40%. First-time buying has, however, slowly improved from cycle lows in the high 20%’s, and in my opinion has plenty of runway ahead. 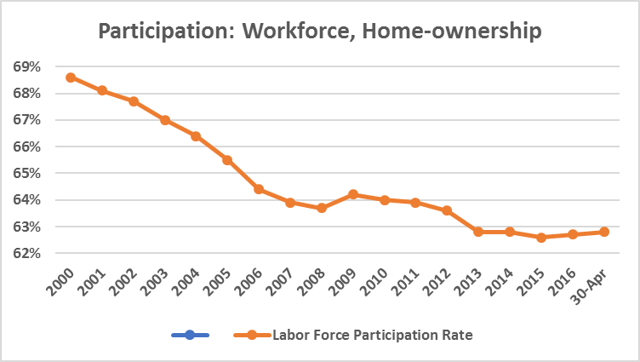 A couple quick observations. The tight relationship between labor force participation and home-ownership, both of which appear to be bottoming or at least steadying. And, more importantly, the nearly six percentage point drop in home-ownership since 2004, and the comparable decline in entry level home purchases from most past averages. 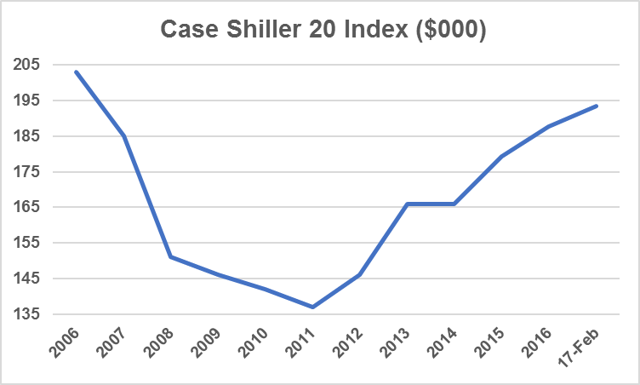 The most important driver for housing demand is job growth. Moreover, it’s the absolute number of jobs created, rather than the unemployment rate, that housing most depends. 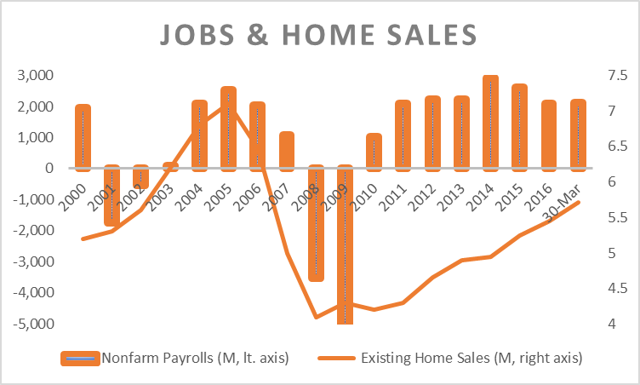 The 2017 YTD figure is annualized, and based on latest figures: April’s jobs and March’s home sales.

Indeed, existing home sales have tracked changes in jobs, but in direction – rather than in magnitude. Since housing peaked in late-2005, the US economy has added roughly 11 million new jobs, yet housing activity remains solidly below past levels, as we’ll talk more about. At some point new jobs will more accurately translate into similar increases in home sales.

Consumer confidence is the next most important driver of home sales, after employment. Multiple cycles of empirical data bear this out. 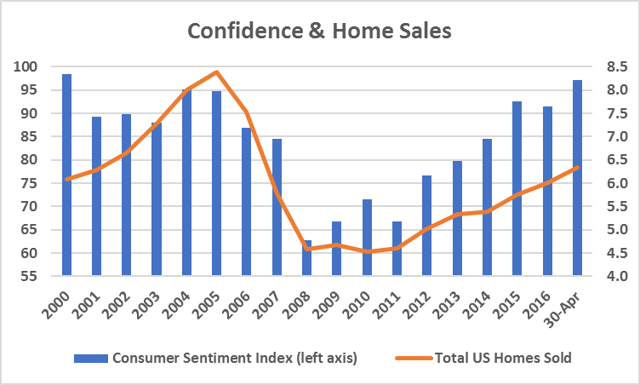 Consumer sentiment based on annual averages of month-end figures

Sources: University of Michigan, US Dept. of Labor (BLS), NAR

Despite steady improvements in consumer confidence since its 2008 trough, the figure, though still steadily upward trending, remains below it base level (100) just as home sales volumes track below their ‘normalized’ levels.

Interest Rates Matter, Though Less Than Is Assumed

Of course rates matter for housing: a single percentage point decline in mortgage rates buys a 15% more house (over 30 years, ceteris paribus). But, contrary to conventional beliefs, empirical evidence suggests interest rates rank behind consumer confidence in terms of importance for the industry.

Although it’s the third leg of the proverbial stool supporting home sales, (mortgage) rates are the factor that most directly benefit from a Federal Reserve Board that has been decidedly ‘dovish’, pursuing relatively easy monetary policy these past 35 years or so. 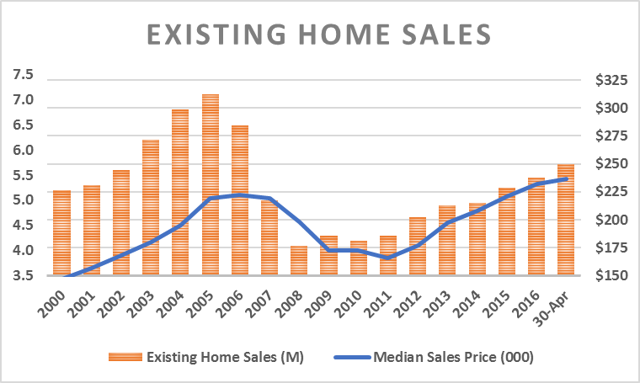 Yet as investors (and borrowers) handicap a potential increase in short-term rates by the central bank in its next (NYSEARCA:JUNE) meeting, we tend to overstate the impact of mortgage rates on housing.

Favorable borrowing rates had a mitigating effect on the housing ‘bust’. The Fed’s move to zero short-term rates, which lasted a full seven-years (Dec. ’08 – Dec. ’15) has thus far had a similarly benign impact on the subsequent recovery.

Yet were it not for mortgage rates following 10-year Treasurys to just over 2% with the launch of quantitative easing (late-2008), financial history might have been much different: One can only speculate on the further damage to home prices, mortgages (especially adjustable), securitizations, etc. that would have occurred had the Federal Reserve not stepped in with zero rates and levered its balance sheet by $4 trillion.